Groupon announced today that the Chinese group-buying portal GaoPeng.com is officially live today. The portal is funded by Groupon,  Tencent Collaboration Fund and Yunfeng Capital, and is now accepting email registrations. Deals will premier on the service in March.

“As the pioneer of the space and the market leader in over 40 countries, we’re pleased to share our learnings with the GaoPeng team and bring a Groupon-quality customer and merchant local e-commerce experience to Mainland China,” said Groupon CEO Andrew Mason in a post on the company’s blog. “?We look forward to working with Tencent Collaboration Fund and Yunfeng Capital to deliver unbeatable deals from top local businesses, starting in Beijing and Shanghai this March!”

The site has a fairly familiar look: 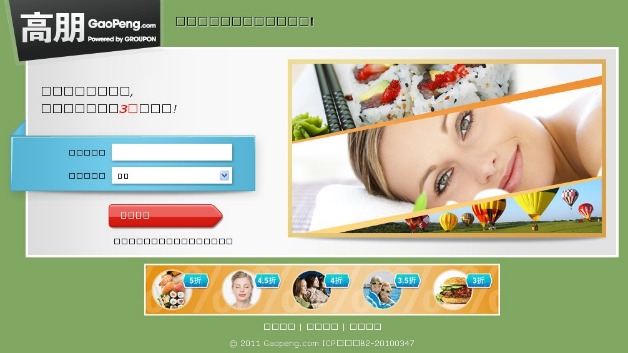 “Groupon is a recognized brand name with excellent operational and sales execution capabilities,” said Yun Ouyang, head of GaoPeng. “GaoPeng will learn from the international group-buying experience of Groupon while focusing on the local market in China. We are committed to catering to the local and diversified shopping needs of local customers and to the business needs of local merchants.”

“GaoPeng aims to introduce a sophisticated group-buying business model and an international service standard to the market,” Ouyang added. “We hope to work together with other local group-buying portals to jointly develop this emerging market, which will ultimately benefit the consumers and merchants in China.“

GaoPeng is based in Beijing. At first it will cover Beijing and Shanghai, but will later extend to other major cities in China.