GamePoints Centralizes Virtual Currency for Facebook and Other Gaming Apps

Offerpal Media, a company that provides virtual currency monetization for developers of social media gaming apps, has launched a new destination for consumers to earn, buy, manage, and redeem virtual currencies, called GamePoints.com. "Virtual currency is a huge market — $1.6 billion in the U.S. alone, and over $7 billion worldwide," a representative for Offerpal tells WebProNews. "Yet, until now there has been no way for online gamers to acquire and manage all their virtual currencies in one central location."

GamePoints.com is a portal that rewards members with virtual currency for use in online games when they complete tasks like shopping at big-brand retailers, watching online videos, trading in unwanted gift cards, etc.

"Game Points" can be exchanged for in-game virtual currency in over 1,500 online games and apps in social networking platforms, virtual worlds, MMOs and other gaming sites. 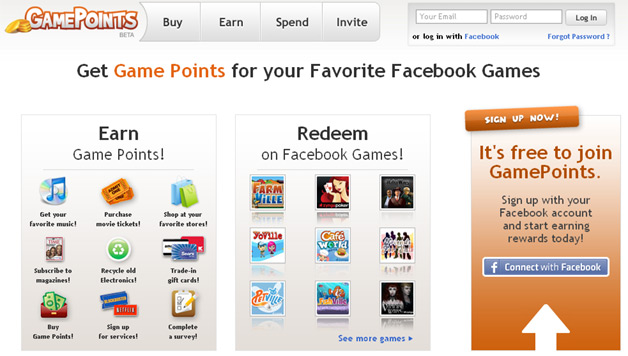 "GamePoints.com is part online bank and part reward center for virtual currency – gamers can check their balance like a bank, exchange one currency for another to spend on whatever game they want, and earn free rewards points," the rep says. "Offerpal now helps game developers capture revenue outside of their application or web site. At the same time, GamePoints.com represents a powerful new marketing channel for advertisers and marketers looking to conduct targeted brand building and customer acquisition campaigns."

"Virtual currency has become an integral part of the online gaming experience, enabling consumers to purchase everything from clothes and accessories for their avatars to functional items that confer some type of advantage within the game," says CEO George Garrick. "We launched GamePoints.com to empower online gamers with ways to earn virtual currency for free rather than having to pay for it, and to give them the choice of spending that currency wherever they’d like within our vast network."

Gamepoints.com has launched in beta staus. During the beta program, Game Points can be spent in gaming apps on Facebook. After the general release, they will be able to be spent in games on MySpace, Bebo, Hi5 and other social networks as well as standalone MMO and virtual world sites.