Future iPhones to Include Speech-To-Text and Text-To-Speech?

Ever been in a loud room and unable to understand your friend over the phone? What if they could instead convert their voice communication to a text? This may be possible on upcoming iOS devices, according to a new Apple patent published this morning by the US Patent office.

On the flip-side, what if you were in a meeting and needed to get a message to someone. The whispering softly into the mouthpiece thing won’t usually fly. So you decide to text. But what if they don’t have text messaging capabilities? Your texts could be converted to audible speech for them.

These scenarios are just some of the many ways in which text-to-speech and speech-to text technology could be used in the future. According to Patently Apple, future iPhones are likely to provide these services. 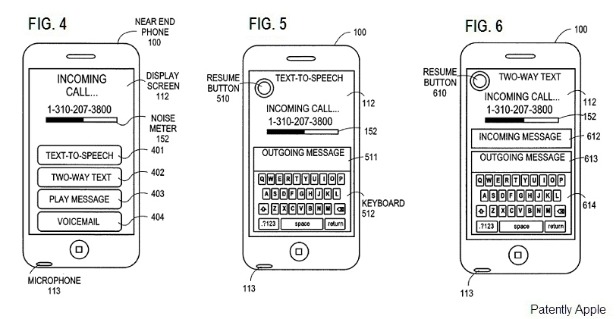 One embodiment of the invention is directed to an iPhone which establishes an audio connection with a far-end user via a communication network. The communication device receives text input from a near-end user, and converts the text input into speech signals. The speech signals are transmitted to the far-end user using the established audio connection while muting audio input to its audio receiving component.

In another embodiment, the near-end user can activate text-to-speech conversion whenever necessary regardless of the detected noise level. The near-end user could enter a text message, which is converted into speech signals for transmission via the established audio connection to the far-end user.

Though it is probably unlikely that speech-to-text and vice versa would appear on the upcoming iPhone 5, future models may well carry the capability. And if you are unaware of the rumors surrounding the iPhone 5, check out our rumor roundup.

How useful would these functions be? Would you be happy to see them come to the iPhone?