FTC Cracks Down On Mortgage Spammer

The Federal Trade Commission (FTC) said today it has asked a federal judge to shut down a company that allegedly sent people millions of spam text messages.

The text messages allegedly advertised for a deceptive mortgage modification website called “loanmod-gov.net.” The FTC is asking the court to freeze the defendant’s assets. 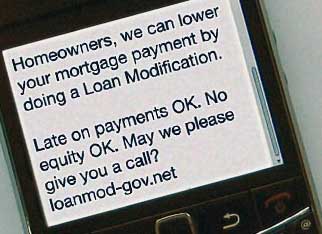 According to the FTC complaint, the defendant behind the operation, Phillip A. Flora, sent millions of text messages, pitching loan modification assistance, debt relief, and other services. In one 40-day period, Flora sent more than 5.5 million spam text messages, a “mind boggling” rate of about 85 per minute, every minute of every day, according to additional court documents filed by the agency.

The FTC alleges that people lose money as a result of Flora’s spam text messaging because many of them get stuck paying fees to their mobile carriers to receive the unwanted text messages.

The text messages told people to respond to the message or visit one of the company’s websites. One of the sites, loanmod-gov.net, used a web address that appeared to be a government web address, claimed to provide “Official Home Loan Modification and Audit Assistance Information,” and displayed a photo of an American flag.

According to the FTC’s complaint, Flora collects information from consumers who respond to the text messages – even those asking him to stop sending messages. He then sells their contact information to marketers claiming they are “debt settlement leads.”