Early Monday morning the followers of Fox News’ political Twitter Account, @foxnewspolitics, were hit with a series of jarring tweets that reported the assassination of President Barack Obama. That particular Twitter account has over 38,000 followers.

At around midnight some people noticed that the account’s logo had been changed to an SK logo and the bio information had been changed to read “H4CK3D BY TH3 5CR1PT K1DD3S.” That stayed that way for just a short time before tweets began rolling out saying that Obama was dead.

The first tweet coming from the @foxnewspolitics account stated that @BarackObama had “just passed.” Later tweets went on the detail the purported incident, saying that he was shot twice at a restaurant in Iowa. The tweets then used the hashtags #america and #obamadead. Here’s a screencap of all the tweets that went out on the 4th. 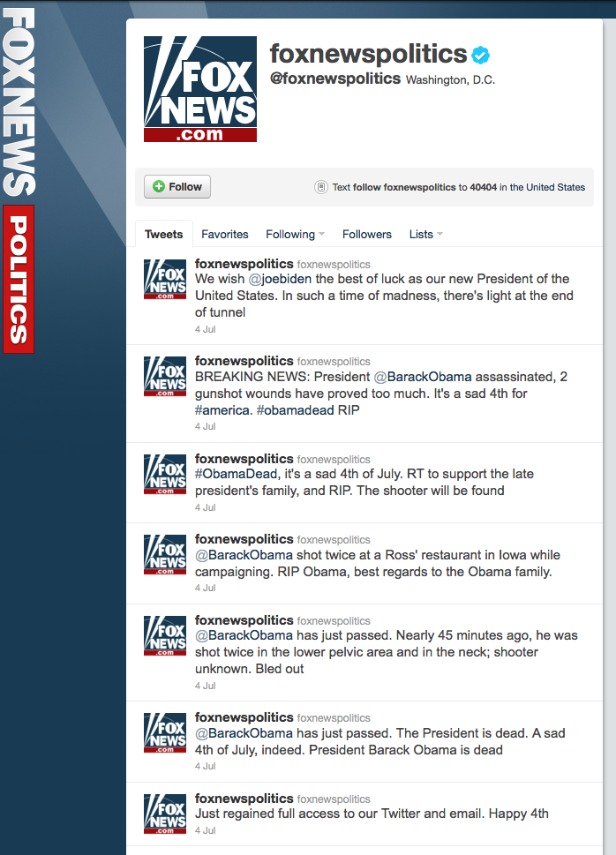 The tweets weren’t removed until about 10 hours after they were first posted. Fox News released a statement saying that their @foxnewspolitics accounts had been hacked.

Jeff Misenti, vice president and general manager of Fox News Digital, said FoxNews.com was working with Twitter to address the situation as quickly as possible.

“We will be requesting a detailed investigation from Twitter about how this occurred, and measures to prevent future unauthorized access into FoxNews.com accounts,” Misenti said.

FoxNews.com regrets any distress the false tweets may have created.

The group behind the hack call themselves The Script Kiddies. Members of the group talked to ThinkSB and told them that they have an affiliation with Anonymous.

“I would consider us to be close in relation [to Anonymous], 2 of the members of our group were members of Anonymous,” said a representative of The Script Kiddies to ThinkSB. “I was a member of Anonymous. We hope to be working with them soon.”

“We are looking to find information about corporations to assist with antisec. Fox News was selected because we figured their security would be just as much of a joke as their reporting,” the anonymous member said.

Twitter has said that the e-mail account associated with the specific @foxnewspolitics account had been compromised, not their servers. The White House hasn’t commented but the Secret Service has said that they are investigating the matter.