Today begins the 2011 Google I/O conference, which will bring thousands of developers to San Francisco to immerse themselves in the world of next gen applications.  Foursquare has teamed up with Google at this year’s conference to offer a look into what may well be the check-in of tomorrow.

Foursquare and Google have worked together to allow attendees the ability to check-in using Near-field communication (NFC).  Briefly, NFC is short wave wireless communication.  It is usually invoked during the discussion of mobile payments but it has a ton of other applications. 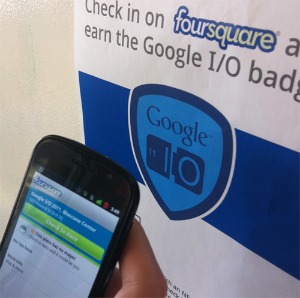 Basically, two NFC enabled devices are able to transmit information just by being relatively close to one another.  At the I/O conference, Google has placed NFC checkpoints all around the convention center.  Users with NFC enabled devices (most new Android phones, wink, Google) can simply tap their phones against a poster checkpoint and check-in automatically.

From the 4sq blog:

NFC is, obviously, a long way from being available everywhere and in all phones, but we’re excited by some of the potential. Google I/O attendees: have fun tapping in.

NFC capabilities are not available in all devices yet, but its frequency is growing.  As the 4sq blog points out, most newer Android phones are NFC enabled.  There are rumors that both the iPhone 5 and the new Windows Phone will come capable of NFC.

Foursquare employees have already been testing out check-ins using NFC, according to this tweet from product manager Noah Weiss:

70 days ago via foursquare · powered by @socialditto

It seems like it is a strong possibility that NFC check-ins will become the norm in the months and years to come.  NFC “checkpoints” can be embedded in almost anything, and it would give users a more streamlined location sharing experience.  Instead of going through the current check-in process, you can just tap your phone on something and go.

The current check-in process was recently call “clunky and heavy” by Foursquare CEO Dennis Crowley  at a Girls in Tech event.  There, he outlined the future of the company, which involves an improved check-in system where users may be prompted to check-in at places they commonly frequent or directed to go somewhere because their friends are hanging out there.

Will NFC check-ins brighten your experience with Foursquare or other check-in services?

May 10, 2011
Recent Posts
Registration is disabled.