33% Of Online Pop. Pegged As “Conversationalists”

Although you probably guessed as much, people who occasionally update their Facebook status or post something on Twitter represent a significant portion of the online community.  And today, Forrester pegged the exact portion at 33 percent.

Forrester’s been classifying online people as inactives, spectators, joiners, collectors, critics, and creators for quite some time, and its statistics regarding these groups have provided valuable about how the online landscape is changing.

The problem, as Forrester analyst Josh Bernoff noted earlier, is that these categories didn’t leave much room for normal Facebook and Twitter users.

So the conversationalists classification was introduced to represent Twitter users and Facebook users who make at least one status update per week.  Exactly 33 percent of online folks should fall into this grouping, and Bernoff added, "They’re 56% female, more than any other group in the ladder." 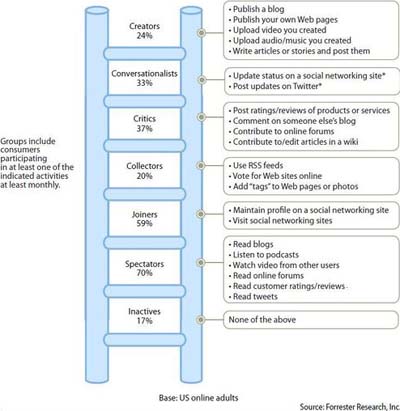 The above diagram pretty well shows the breakdown of other groups.  Now we just get to sit back and see how quickly people travel up the ladder as the social Web gains momentum.

Online Grocery Shopping Set To Double In The U.K.