Flock has announced a complete redesign of its browser, originally based on Mozilla Firefox. The new one is based on Google’s Chromium platform (the open-source project behind Google Chrome), and like Chrome, places a great deal of emphasis on speed.

"Over the last year Flock conducted an incredible amount of customer research from one-on-one interviews to focus groups to analyzing anonymous data from millions of users," Hardin tells us. "It is clear that all age groups are now participating in social, and users are trying to balance the enormous benefits of staying connected with their friends while also managing the overwhelming amounts information that’s coming to them everyday. While they love their social networks, they’re seeking better ways to organize and manage the people and content they care about. The new Flock is all about helping users do that and we determined that the Chromium platform was the best platform for us to use in the redesign of Flock." 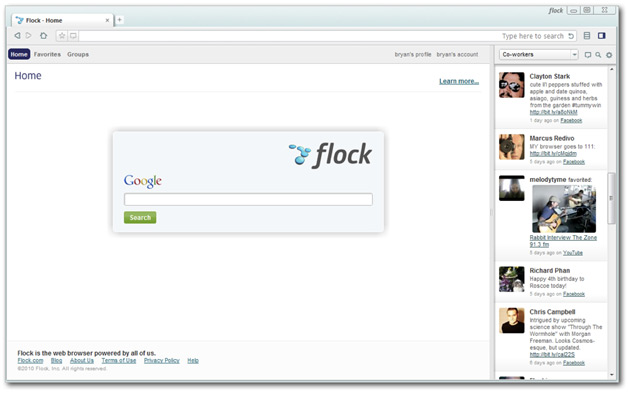 Flock has been working with Google’s Chromium team over the last year on this redesign, which is the first major browser outside of Chrome to be released on the Chromium platform. It comes with both the ability to do social networking/media search and social network grouping within the browser. "It will also be faster than IE and Firefox," a representative for Flock tells us.

With the Groups feature, users can "Channel Surf" the Web, as the company puts it, by switching the view of the scrolling sidebar between the conversations and information they are most interested in at any given time. There is also a "What Your Friends Are Saying" feature that shows exactly that – from multiple social networks. 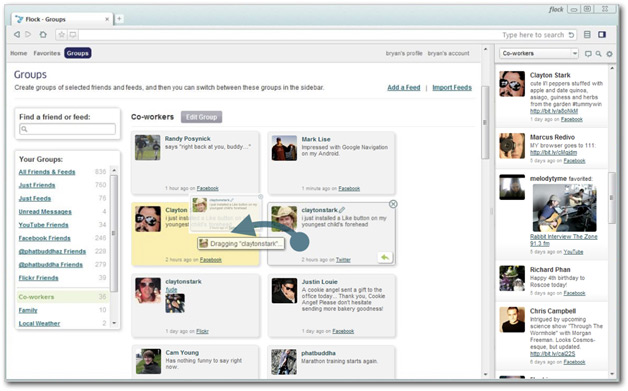 "Our interactions with people online have changed everything about the way we discover, shop, work and play," says Hardin. "The new Flock is designed to naturally complement the value we place in relationships and puts you at the center of your friends and their conversations while you browse the Web. Conventional browsers like Internet Explorer and Safari aren’t built to bring together the conversations and content that matter to each user. Flock is the only browser with the best of the social Web built-in."

Google is the default search option for the browser, which is also able to tap into thousands of Chrome extensions, as it is based on the same technology as Chrome.

Flock is already the number one desktop app on Facebook and is ranked in the top 100 most popular of all Facebook apps. It’s also ranked the sixth most popular browser operating in Europe, according to Net Applications.

The new Flock browser is immediately available for Windows, and can be downloaded at Flock.com. The Mac version will be out later this summer.