If anyone at Mozilla is keeping some sort of historical record, December 2010 is a month that’s sure to be starred.  A new report from StatCounter indicates that, in terms of market share, Firefox wound up ahead of Internet Explorer in Europe.

This was perhaps not a pretty victory, as it only occurred due to a loss on IE’s part.  IE’s market share in fact fell from 38.91 percent in November to 37.52 percent in December, according to StatCounter, while Firefox’s market share declined from 38.50 percent to 38.11 percent.

Still, Aodhan Cullen, the CEO StatCounter, highlighted the significance of the occasion by stating, "This is the first time that IE has been dethroned from the number one spot in a major territory."

Then Cullen explained, "This appears to be happening because Google’s Chrome is stealing share from Internet Explorer while Firefox is mainly maintaining its existing share." 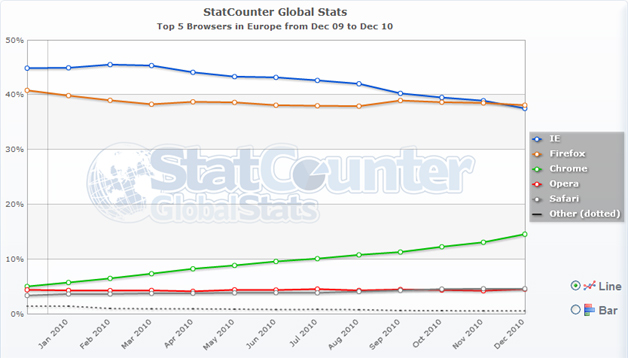 It wouldn’t be surprising if Microsoft adds a few more employees to the IE9 team as a result of this data.