While they may never top Internet Explorer’s market share — it’s hard to top a program that comes pre-installed on all Windows-environment computers — that doesn’t mean the folks at Mozilla won’t make the most of their latest Firefox browser launch. Instead of relying simply on Internet buzz, Mozilla has been much more active with the launch of Firefox 4, embracing our desire for infographics and pretty pieces of software that track things on a global basis.

Mozilla has show such excitement for tracking Firefox 4’s progress, they’ve produced two such pieces that keep those who monitor the browser wars abreast of, well, just about every little detail you can imagine. First, the infographic covering the first 48 hours of Firefox 4’s launch: 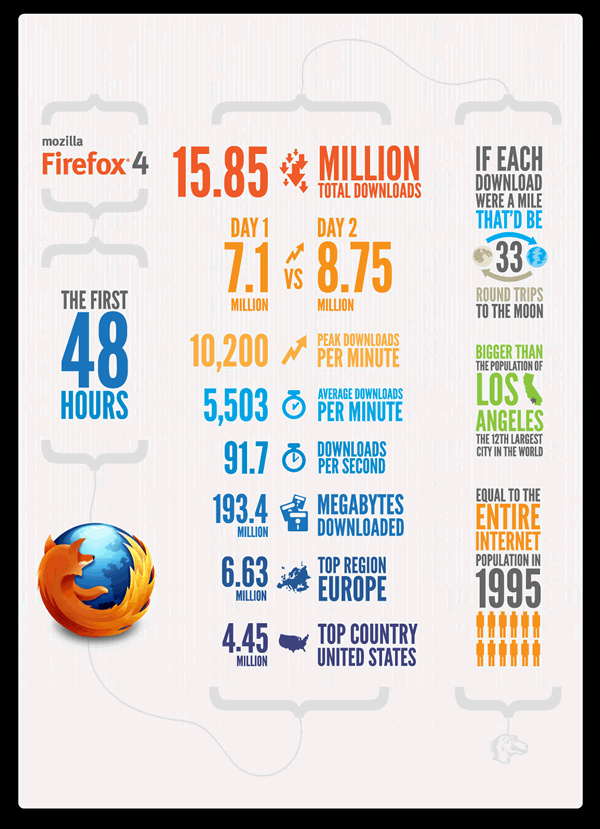 Click for bigger image
It should be noted that the 15.85 million downloads during the first 48 has since nearly doubled to over 26 million (courtesy of the Firefox 4 Download Stats utility, the pretty piece of software discussed earlier). Other information like total megabytes downloaded and average downloads per minute is also of note.

However, the top country and top region seems to be conflicting; or, at least it doesn’t make much sense. With almost 5 million downloads from the US, the North American continent only 2 million more downloads to top Europe. Perhaps Canadian Internet users are afraid of how much the Firefox download would cost them in terms of bandwidth usage.

Needless to say, after reviewing Mozilla’s information, the Firefox 4 launch has to be considered a wild success. For those interested, it can be downloaded here, and be sure to read the WebProNews review of the oft-downloaded browser.