Mozilla released Firefox 4 for Android to mixed reviews. The above video makes it seem pretty nice, but there are more than a few complaints – among the biggest – a lack of Flash support.

“Firefox for mobile allows users to take the Firefox experience they love everywhere and minimizes typing with features like tabbed browsing, bookmarks, add-ons and Firefox Sync,” says Mozilla. “With a sleek new look that hides browser controls when not in use, Firefox allows users to focus on the websites they visit. Firefox Sync gives users seamless access to their browsing history, bookmarks, open tabs, form data and passwords across computers and mobile devices. Firefox also offers thousands of ways to customize the features, functionality and look of mobile Web browsing with Firefox Add-ons.”

“Firefox is up to three times faster than the stock browser on Android,” says Mozilla. “Major enhancements to the JavaScript engine make everything from page load speed to graphics to overall performance snappy in Firefox.” 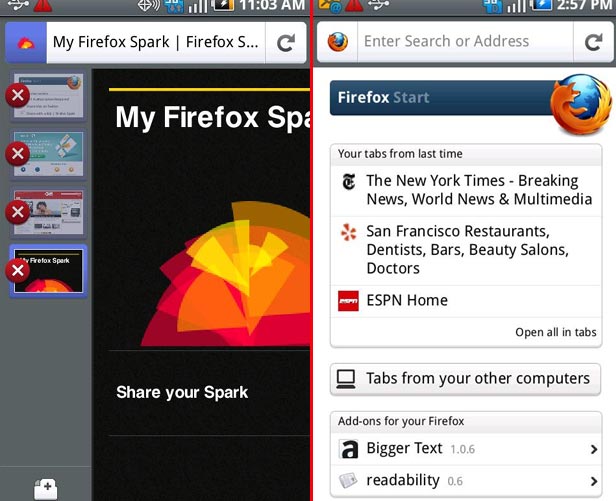 Still, speed seems to be another one of the top complaints about the browser. While they’re not all bad, there are a lot of negative review pouring into the Android Market. Here are a few examples:

“What a piece of crap. Slow and buggy. Crashes on Mozilla’s own spark site…”

“Extremely slow on HTC desire, and even slows down the main system. +no pitch …”

“This browser is incredible in it’s idea, however, its functionality is very sadly lacking…”

Here are a few of the more positive ones:

“Extremely fast. If it is slow on your device you probably need a faster phone to run it”

“Blows the inbuilt browser out of the water when it comes to speed.”

There are currently 280 reviews listed on the Android Market. If you want a more well-rounded look, you can browse here.

People seem to really like Firefox 4 for the desktop. Since its release last week, it’s been downloaded over 45 million times. Here’s a review of that.