It’d be a big understatement to say that 140-character messages are becoming more common online.  Tweet-related data has been released (and analyzed), proving that rapid growth is taking place, and one prediction even puts the number of tweets that’ll be transmitted this month at 1.4 billion.

Believe it or not, Pingdom’s forecast is really quite sane.  In December, Twitter passed the billion-tweets-per-month mark.  Then, in January, 1.2 billion tweets were documented.  So 1.4 billion wouldn’t represent much more than the continuation of this trend. 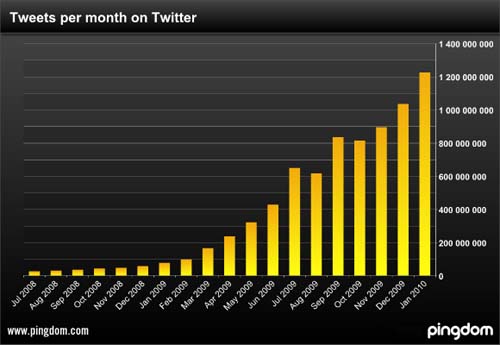 As for some other patterns and facts Pingdom observed, a blog post stated, "January 2010 had 16 times as many tweets as January 2009."  Also, "The activity on Twitter has doubled since August 2009."

Then here’s one more piece of information to consider: "January 2010 saw more tweets per day (39.5 million) than the whole of September 2008."

Twitter may still have some hurdles to overcome in terms of attracting and retaining users; past figures on those subjects have been a little less remarkable.  But in terms of getting its current user base to become more chatty, it seems that Twitter’s meeting with about as much success as anyone could hope for.

Opera: Mini Will Save iPhone Users Money and Time