Facebook’s Guide to the World Cup

Facebook has posted the Facebook Guide to the World Cup, which shows soccer/football fans how to get the most out of the World Cup experience on the social network. "Facebook is helping football fans make the World Cup a more social experience, a Facebook representative tells WebProNews. "Fans around the world can take part in the World Cup action by joining the more than 2.5 million Facebook users who have liked and supported their favorite teams on the Goal! Leaderboard."

The Leaderboard displays a running competition to see which country has the most passionate fans, and allows them to support their favorite teams and encourage their friends to support them. You can sort it by passion rank, popularity, intensity, region, or group. 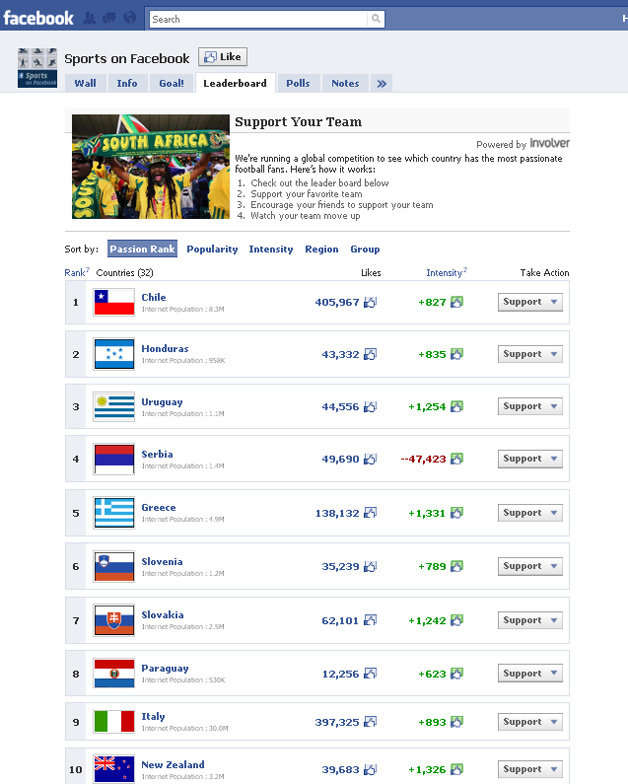 "With the help of Facebook’s global World Cup broadcast partners like Univision and ESPN, fans can share status updates and comments with their friends while watching the events live via Facebook’s Live Stream social plugin," the rep says.

"Fans can also build their own dream team with the EA SPORTS FIFA Superstars game on Facebook," she adds. "And for the giving fan, you can sign up to support 1GOAL, the World Cup charity that aims to ensure education for all, and stay connected with them on Facebook."

On a related note, we also received an email touting Watercooler’s Epic Goal as the "best soccer game on Facebook." I can’t personally vouch for this, but in the spirit of things, it seemed worth passing on. This review looks at some different ones.