Not to be outdone by Google and all the buzz (no pun intended) surrounding their brand new social project, Google +, Facebook CEO Mark Zuckerberg made an announcement of his own yesterday.

Speaking to reporters at Facebook’s Seattle office, Zuckerberg said that his company would “launch something awesome” next week.

What is this awesome thing that will blow us all away next week? Speculations ranged from the debut of the new Facebook app for the iPad to the launch of the much talked about Facebook photo-sharing app for iPhone.

Today, some people received a vague invitation from Facebook that simply asked them to “please join us for an event at Facebook.” It is said to be an invite-only event and that space is limited. Here’s what the invite looks like – 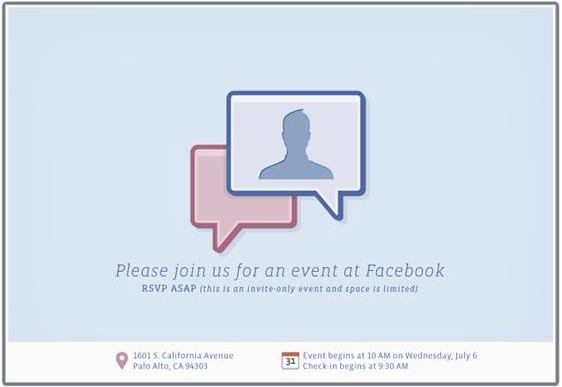 Those chat bubbles now make a lot of sense, as TechCrunch is reporting that Facebook plans to launch in-browser video chat powered by Skype. They base this on a source with “knowledge of the partnership.”

The product has been built on Skype and will include a desktop component. It’s not clear to me whether that means it will just work if a user has Skype already installed on the computer, or if additional software will need to be downloaded even if the user already uses Skype. But from the user’s perspective, the product will be an in browser experience.

Apparently this is not the entirety of Facebook’s huge new project, but definitely a part of it.

This could be huge for both Facebook and Skype. Skype will now have access to a Facebook user base that more than quadruples its own. Facebook will look to make its service even more inclusive with seamless video chat that is launched straight from the page.

And of course, Skype serves as a link between Facebook and Microsoft, who bought the service back in May.