Facebook Will Give Your Mobile Phone, Address Info to Developers Again

Facebook said it had received useful feedback that they could make people more clearly aware of when they are granting access to contact data. The company said it was temporarily disabling the feature.

Now, in a letter to Congress (pdf), Facebook (via CNET’s Declan McCullagh), Facebook is talking about bringing the feature back. In the letter, Marne Levine, VP, Global Public Policy says Facebook is  "assessing potential additions to the permissions screen that would appear when an application requests a user’s contact information, to determine whether those additions would provide clearer notice to users regarding the information the application is requesting." 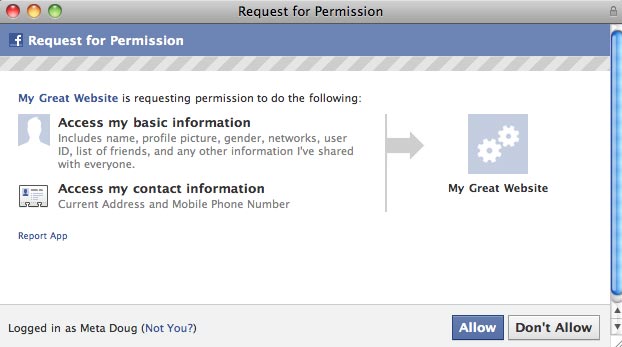 "The decision to temporarily suspend the permissions for contact information was sparked by some initial user feedback over the first couple days that the permission was offered," wrote Levine. "A key Facebook priority – indeed, one of our foundational principles – is to ensure users can exercise control over their information, and we are always striving to improve the notices we provide to users. On review of the user feedback we received in the wake of the product launch, we determined that we might be able to increase visibility of these categories of data in the permissions screen, and we decided to suspend the feature pending that review. Facebook is committed to providing clear notices to users because we know how important it is for users to trust that they have control over their information."

Facebook says it has not decided when or in what manner it will re-deploy the permission for mobile numbers and addresses. Based on the letter, however, I’d expect them back before too long.