Remember that old line about Facebook allowing you to have a thousand friends that you’ve never met? Turns out that’s not really the case at all. According to a new Pew Internet study called “Social Networking Site and Our Lives,” Facebook actually helps to strengthen relationships rather than undermine them.

The Pew study looked at the way Facebook and other social network (SNS) users compare to non-SNS users when it comes to friends and relationships. What they found was that SNS participants, especially Facebook users, tend to have more close friends, more overall relationship ties and tend to be more trusting of other human beings.

First of all, the typical assumption that people have hundreds and hundreds of random friends on Facebook – ones that they just friend online and have never actually met – is a myth. According to the Pew study, only 7% of an average person’s Facebook friends are total strangers. A whopping 89% of Facebook friends are people who the user has met more than once. 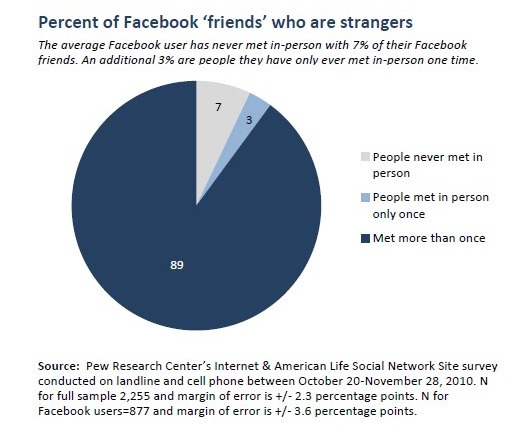 The average Facebooker has around 229 friends. This ends up being about 48% of their real life social network. And the truly interesting thing is that Facebook users not only have more friends than non-Facebook users, but they tend to have more close friends, or “discussion partners,” as Pew calls them.

Discussion partners are the closest of the close according to Pew. The people who you really talk to about stuff. Basically, when it hits the fan, these are the people you’re going to call. Non-internet users only report an average of 1.75 people who fit this bill. Internet users as a whole report 2.27 people. Facebook users report an even higher amount, at 2.45 people.

And who are people’s friends on Facebook? Overwhelmingly high school buddies, followed by college buddies. 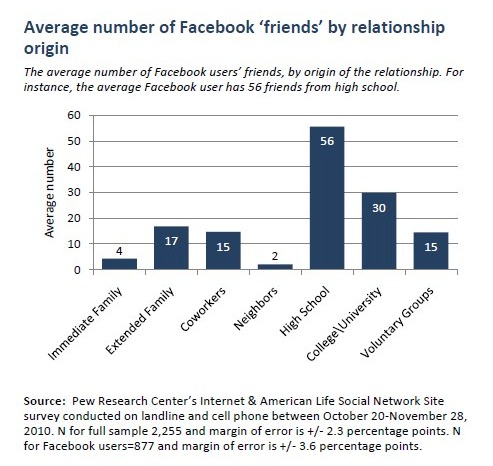 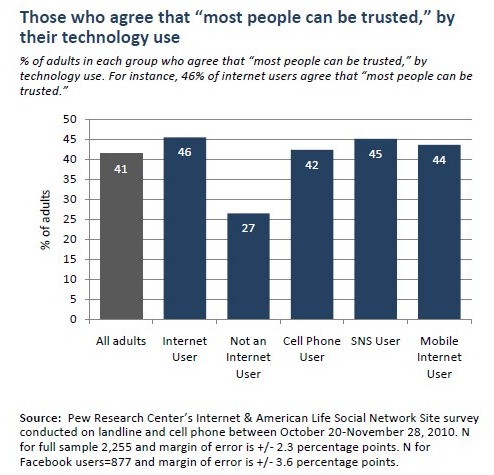 Only 27% of non-internet users agree with that statement. 46% on internet users do. Apparently Facebook makes you a more trusting individual, but not Twitter, LinkedIn or Myspace –

Also, when we control for demographic factors and types of technology use, we find that there is a significant relationship between the use of SNS and trust, but only for those who use Facebook – not other SNS platforms. A Facebook user who uses the service multiple times per day is 43% more likely than other internet users, or three times (3.07x) more likely than a non-internet user, to feel that “most people can be trusted.”

Social networking isn’t killing our relationships, on the contrary is looks like it is helping them. The “likelihood of an American experiencing a deficit in social support” or “being disengaged from their community” is “unlikely to be a result of how they use technology” according to the study. So if you’re looking to blame the decline of American social culture on Facebook, you’re barking up the wrong tree.

How Will These New Developments Impact Facebook's Dominance?

Is Dave Chappelle Coming To Netflix?