Facebook made its big "email" announcement, and yes, you will be able to get an @facebook.com email address." It’s not all about email, however, as CEO Mark Zuckerberg explained. It’s about "seamless" integration across email, IM, SMS, and all these ways of communication.

Will use Facebook’s new messaging system? Do you want a Facebook email address? Let us know.

Note: This article has been updated with further commentary.

It’s also about "conversation history", meaning you can keep a running dialogue with everybody you communicate with in a continuous thread for each person or each group of people.

"Five years from now, you’re just going to have this full, rich history," Zuckerberg says of the conversation history feature. Facebook’s Andrew Bosworth compared it to having a box full of letters between boyfriend and girlfriend from the beginning of the relationship to the present.

Users do have the ability to delete conversations.

Finally, it’s also about a "social inbox", which is where message prioritization comes in. Facebook will use the information it knows about who your friends are (based on the user’s friends list and their friends’ friends list) to prioritize the messages it thinks you’ll be really interested in. 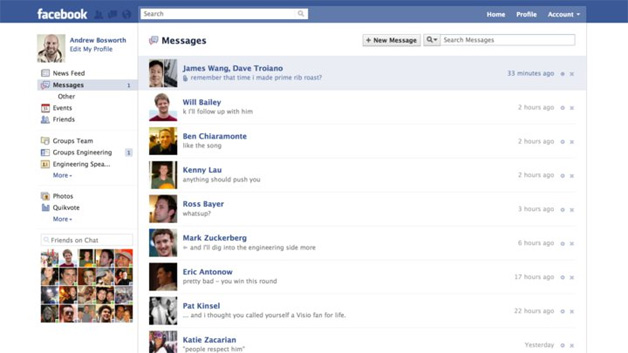 It will place priority on friends and friends’ friends. There will then be another folder that will have stuff like bills, pages liked, etc. It’s not spam, but not stuff you care about as much as the friends’ messages (although, I’d suggest bills might deserve higher priority than some of the stuff your friends [or especially friends of friends] are saying). Then there’s the junk folder for spam.

Is Facebook’s New System a Danger to Email?

"This is not an email killer. This is a messaging system that includes email as one part of it." 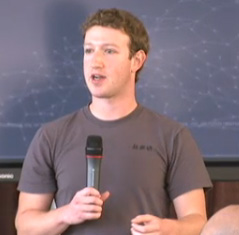 "We don’t expect anyone to wake up tomorrow and say, ‘Ok, I’m going to shut down my Yahoo Mail account or my Gmail account," Zuckerberg said. He later added that maybe one day people will start to say that email isn’t as important as it was before, thought it "will always be a part."

"I think Gmail’s a really good product," he also noted during a Q&A session, responding to a lot of the press painting the announcement as a "Gmail killer."

"Relatively soon, we’ll probably all stop using arbitrary ten digit numbers and bizarre sequences of characters to contact each other," adds Joel Seligstein on the Facebook blog. "We will just select friends by name and be able to share with them instantly. We aren’t there yet, but the changes today are a small first step."

Admittedly, there is something attractive about that concept, and lots of users are bound to agree. Still, the system faces an enormous hurdle – trust. Facebook doesn’t exactly have the best reputation when it comes to privacy and user data, but that hasn’t stopped users from continuing to share massive amounts of information with the service, so that may not be as big a hurdle as it would seem.

Will This Cause Businesses to Utilize Personal Profiles More?

I wrote an article recently, discussing what implications a Facebook email service could potentially have on marketing. That was before the product was launched and we really knew all the details. My first impressions of this announcement tell me that this is going to be both good and bad for marketers, if it gains widespread adoption.

For one, it’s bringing all these different communications into a central place – Facebook – and that is a place where people are spending a great deal of their time already, and it has push notifications on mobile, so users will be alerted all the time. On the other hand, it sounds like business messages will be pushed out of priority’s way in favor of actual friend dialogue. The frequency at which people would use the "other inbox" would come down to an individual-by-individual basis.

It will be interesting to see if more businesses start utilizing personal profiles in addition to their business pages in order to get into users’ prioritized inboxes. Your personal interactions would theoretically make the cut. This could actually help brands humanize themselves and use social media the way it was intended – for conversations. Brands will face the obstacle of of actually getting customers to accept their friend requests (and quite frankly, I hope this doesn’t translate into friend request spam, though I can see that happening), but it will force authenticity and actual relationships.

Meanwhile, the secondary inbox will still contain all of your email marketing messages, and while this may not be checked as frequently as the prioritized one, it will still be checked. Remember, these are opt-in emails coming to the secondary inbox. It’s email that users want (assuming the spam filter works well). In some cases it’s email they need. If bills are going there, people are not going to ignore this inbox. In fact, Facebook says it expects people to check that box at least once a day.

The new features will be available on an invitation-only basis at first (not unlike the way Gmail started). The @facebook.com addresses are supposed to correspond with your Facebook user name. At this point, it’s unclear how this will work for people who have the same name.

So, what do you think of the announcements? Share your thoughts here.

Is Ranking Number One in Google Losing Its Significance?