Facebook and Twitter continue to chalk up impressive gains in terms of attracting unique audiences.  A new report from Nielsen frames their growth on a year-over-year basis, and the two social networks have managed to achieve increases of 69 percent and 45 percent, respectively.

Those figures are impressive enough on their own, and by chewing them over, it might be possible to delve into lengthy discussions about growth patterns and potential revenue.  But what’s also interesting is that Facebook and Twitter appear to be driving the success of social networks as a whole.

Nielsen found that the unique audience of social networking sites increased between March of 2008 and March of 2009 (from 261.7 million to 313.7 million), and that the time spent per person almost doubled (from about 3 hours and 33 minutes to 6 hours).

Look at the graph below, though, and you’ll see that top social sites other than Facebook and Twitter aren’t doing so hot in terms of winning over new users (or even keeping the old ones coming back). 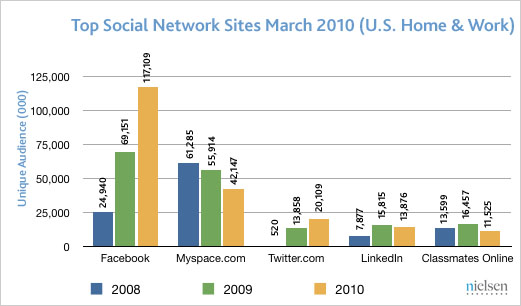 To return to the theoretical discussion about growth patterns and potential revenue: you can almost be sure Facebook and Twitter’s IT and advertising teams will receive copies of this report.

StumbleUpon Claims to Be #1 Social Media Traffic Source for U.S.

May 4, 2010
Latest Posts
Registration is disabled.