An analysis of mobile activities in Japan, the U.S. and Europe found significant differences among consumers by geography, according to a new report from comScore.

Mobile users in Japan were the “most connected” of the three markets, with more than 75 percent using connected media (browsed, accessed applications or downloaded content) in June, compared to 43.7 percent in the U.S. and 38.5 percent in Europe.

Europeans had the strongest use of text messaging with 81.7 percent sending a text in June, compared to 66.8 percent in the U.S. and just 40.1 percent in Japan. Japanese users exhibited the highest reach in the email category at 54 percent, while consumers in the U.S. were most likely to use instant messaging services on their mobile (17.2 %).

Social networking/blogs reached the greatest percentage of mobile users in the U.S. at 21.3 percent, followed by Japan at 17.0 percent and Europe at 14.7 percent. Japanese users were most likely to capture photos (63 percent) and watch TV/video (22 %) on their mobiles, while Europeans were most likely to listen to music (24.2 %) and play games (24.1 %).

In all three markets, the top mobile social media brand mirrored the top PC-based social networking brand with Facebook leading in the U.S. and Europe and Mixi leading in Japan. Local brands Gree and Mobage Town were the #2 and #4 most accessed social networking brands in Japan. Twitter was the only brand to be ranked in the top four in all markets. 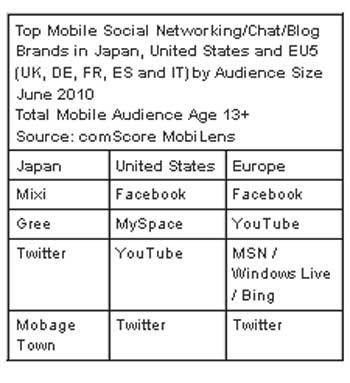 “As we look across markets, dramatic differences in mobile media consumption, brand adoption and user behavior become evident. These differences are even more pronounced than they are for PC-based Internet usage due to the complex nature of mobile – including various device capabilities, operating systems and methods of accessing content. For brands seeking to establish a multi-market presence, understanding usage dynamics across geographies is essential to implementing a successful global mobile marketing strategy.”