Justin Mitchell, an engineer, explained on the Facebook Blog, "When you or a friend upload new photos, we use face recognition software – similar to that found in many photo editing tools – to match your new photos to other photos you’re tagged in.  We group similar photos together and, whenever possible, suggest the name of the friend in the photos."

As a result, "[I]f you upload pictures from your cousin’s wedding, we’ll group together pictures of the bride and suggest her name.  Instead of typing her name 64 times, all you’ll need to do is click ‘Save’ to tag all of your cousin’s pictures at once." 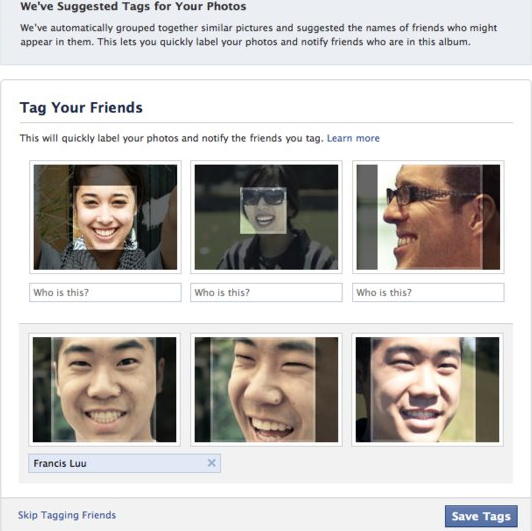 Nifty, eh?  Now for the matter of privacy.  Like before, only friends can tag each other, Facebook notifies people when they’re tagged, and it’s always possible to untag yourself.  Plus, a new privacy setting will even give people the option of not having their names suggested in the first place.

So Facebook seems to have done a good job of thinking through this upgrade.  Assuming not too many people feel otherwise and form protest groups – you can never tell with these things – look for the feature to roll out to U.S. users over the next few weeks.

An international launch will presumably occur at a later date, but Facebook hasn’t said anything on that subject yet.