When Facebook announced that it had reached the 500-million-user milestone, many people expressed a mixture of surprise and awe.  Now, it seems as if Facebook might have been caught off guard, too.  The company’s said it will double the size of its not-yet-complete data center in Prineville, Oregon.

Early this year, Facebook committed to building the custom data center (its first).  The center was supposed to be 147,000 square feet in size, and the first quarter of 2011 was set as the target for completion. 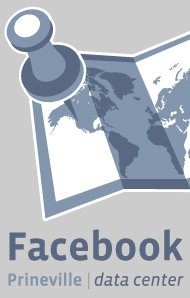 Only Facebook’s apparently been growing much faster than forecast.  That’s the most logical reason for why the company announced in a note, "The expansion will add another 160,000 square foot shell to the 147,000 square foot facility now being built."

Further development is perhaps likely, too.  The note continued, "As business needs dictate, the shell will be built out to accommodate more servers."

Anyway, the original space remains on track, the first expansion is supposed to be finished in early 2012, and the data center is still intended to employ just 35 people.

Facebook hasn’t shared any financial details relating to the construction of the facility.