Facebook is testing some new features for photos. One such feature is a new way of tagging people.

"People love tagging their friends and family in photos, but we’ve heard that it can be a tedious process. You now can add tags with just a couple of clicks directly from your home page and other sections of the site, using the same face detection technology that cameras have used for years," explains Facebook’s new product manager for Photos, Sam Odio. "We’re running a limited test of this technology so you may not see it yet." 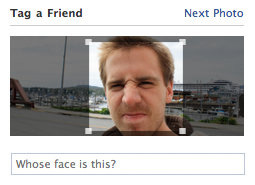 "With this new feature, tagging is faster since you don’t need to select a face," says Odio. "It’s already selected for you, just like those rectangles you see around your friends’ faces when you take a photo with a modern digital camera. All that’s left for you to do is type a name and hit enter."

Odio is the founder of Divvyshot, which Facebook acquired in early April, at which point he told us, "We’re thrilled to be joining the Facebook team and look forward to kicking ass there."

According to Odio, 99% of people using Facebook have uploaded at least one photo, and over 100 million photos are uploaded every day.

Update: I orginally referred to what they’re doing as facial recognition, but it’s actually detection. It recognizes that there is a face, but not necessarily who that face belongs to (so far at least). Face.com is already doing facial recognition for Facebook, however. See that here.

Apple: It's Just the Formula for Signal Strength That's Wrong with the iPhone 4