Update: WebProNews reached out to Teachbook for comment. Read Teachbook’s full response here. See comments from Facebook in the comments section of either article.

Excerpt: "We were unaware the Facebook owned the Internet or the term ‘book,’" Teachbook Managing Partner Greg Shrader tells WebProNews.

Original Article: Facebook is suing a company called Teachbook, which operates a social networking site for teachers, apparently because it has "book" in its name and "competes" with Facebook. Teachbook is described as "a professional community for teachers". Sounds like a threat to Facebook’s existence doesn’t it?

Do you think Facebook should be suing Teachbook? Tell us what you think.

Ryan Tate at Valleywag draws on some irony, saying, "Imagine: Someone ripping off the name of an existing social networking tool for his own site. Why, that hasn’t been done since 2004 when some punk kid at Harvard registered TheFacebook.com while college administrators were already developing their own ‘online facebook.’"

The beginning of the suit reads:

Facebook has become a worldwide social, cultural and political phenomenon. With fame comes imitation. Here, Defendant Teachbook.com LLC rides on the coattails of the fame and enormous goodwill of the FACEBOOK trademark. Misappropriating the distinctive BOOK portion of Facebook’s trademark, Defendant has created its own competing online networking community in a blatant attempt to become Facebook "for Teachers." Despite Facebook’s protests, Defendant has willfully and deliberately persisted in its misappropriation of the Facebook brand, forcing Facebook to protect its user community and the strength of the Famous FACEBOOK trademark through this action.

They’re protecting us – the user community. 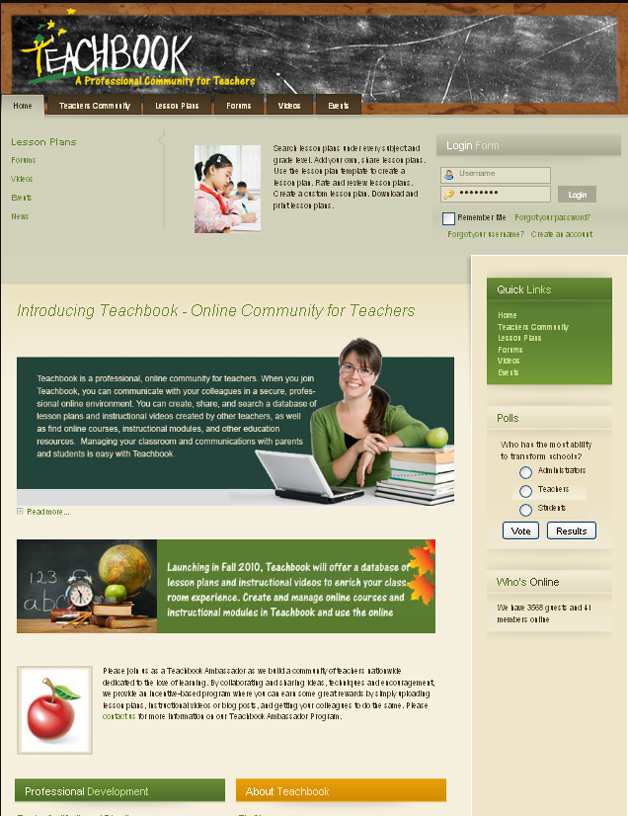 When a user (teacher) joins Teachbook, the site promises the ability to manage a professional profile and all info in the account by choosing to share with admins, colleagues, parents, or public. It lets teachers create lesson plans, instructional videos, and other teaching resources. It lets users manage their classroom communications with secure parent-teacher communication tools (gradebook, events calendar, classroom newsletter, homework space). It lets teachers communicate with colleagues through discussion, chat, blogs, etc. It lets them create and manage online courses and instructional modules. It lets teachers manage student grades by recording, calculating, and sharing them within the Gradebook. (I wonder if Facebook knows they’re using the word "gradebook" too).

Facebook drops the following stats in its case for why others shouldn’t be able to use the word "book" in their names:

– Those users spend over 700 billion minutes per month on Facebook.com.

– Facebook is the second most trafficked site in the U.S.

– Over a million sites have implemented tools Facebook makes available

The suit also mentions that Facebook owns a number of U.S. registrations for the mark FACEBOOK, covering a variety of goods and services, such as online networking services, chat functions, electronic media, online journals with user-defined content and electronic publishing services, and software to enable uploading, tagging, and sharing of electronic media or info.

By this logic, other companies that use either "Face" or "Book" may have to fear. It’s unclear what the company’s stance on the word "the" is, as Facebook was first called "The Facebook". "The" is only slightly more common than "book", especially in the teaching profession, I would imagine. Since "the" is no longer part of the Facbook brand, I’m guessing they won’t pursue that.

This suit comes at a time when Facebook is becoming much more integrated with not only the web, as the company pointed out, but the real world as well. Facebook Places is bringing physical locations to Facebook, and other third-parties are also coming up with different ways to connect physical objects (not just places) to Facebook. Watch out, books!

The entire suit can be read here (pdf).

I’m no lawyer, and I’m not going to pretend to be. Does Facebook have a case? Tell us what you think.