A young boy in Brooklyn is suing social media giant Facebook for using him to endorse a product against his will, according to Bloomberg.

The suit, filed on Justin Nastro’s behalf by his father Frank, complains that Facebook fails to solicit parental permission to use minors’ likeness for the endorsement of products and companies.

This, of course, refers to the “social ads” that Facebook has implemented for awhile now.  If you “like” a brand or product, say Coca-Cola, then you in turn become an endorser of that brand on Facebook.  Ads can appear on friends’ home page asking them to like Coca-Cola with your name attached.  “Like Coca-Cola!  Josh Wolford Likes This.”

Also, as the complaint points out, you can hide your likes from the news feed, but not from being shown up on that specific product’s page.

“Users can prevent their endorsements from being shared with their friends by limiting who can see their posts through their privacy settings,” according to the complaint. “There is, however, no mechanism in place by which a user can prevent their name and likeness from appearing on a Facebook page if they have ‘liked’ it.”

The lawsuit was filed in New York, where a civils rights law states that a person’s image can not be used for advertising without permission.  This is the law that this particular suit is hoping to bank on.  The suit seeks class-action status and damages for any revenue procured by Facebook by the “unlawful” use of minors’ names and images in endorsements.

“We believe this suit is completely without merit and we will fight it vigorously,” a Facebook spokesperson told The Huffington Post. 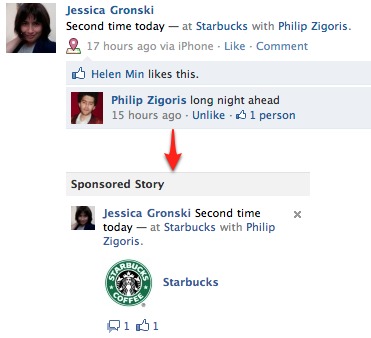 These sponsored stories may become the norm, as IF reported yesterday that the 10-day 2 billion impression test results show that they had a 46% higher click through rate than Facebook’s regular old ads.

This marks one of many lawsuits filed against Facebook recently.  “One man litigation explosion” Larry Klayman sued the company for their hesitation on removing an inflammatory page titled “Third Palestinian Intifada.”  Just recently AOL news writer David Fagin sued Facebook for $1 for labeling him as a spammer and blocking his activity.

And, of course, zombie litigators the Winklevii refuse to let their suit die.

Is Google a Search Company?

May 4, 2011
Latest Posts
Registration is disabled.