At this point, it seems inevitable that people will object to every little tweak Facebook makes; even a 99.9 percent success rate would leave around 400,000 users unhappy.  But Facebook has proposed some revisions to its Privacy Policy and Statement of Rights and Responsibilities in what appears to be an attempt to prepare everyone for some rather big changes.

One interesting amendment relates to location.  Michael Richter, Facebook’s general counsel, confirmed something new is in the works by writing on the Facebook Blog, "The last time we updated the Privacy Policy, we included language describing a location feature we might build in the future. . . .  Now, we’ve got some different ideas that we think are even more exciting. . . .  So, we’ve removed the old language and, instead added the concept of a ‘place’ that could refer to a Page, such as one for a local restaurant."

Richter also hinted at the existence of third-party deals, saying that Facebook’s "explained the possibility of working with some partner websites that we pre-approve to offer a more personalized experience at the moment you visit the site.  In such instances, we would only introduce this feature with a small, select group of partners and we would also offer new controls." 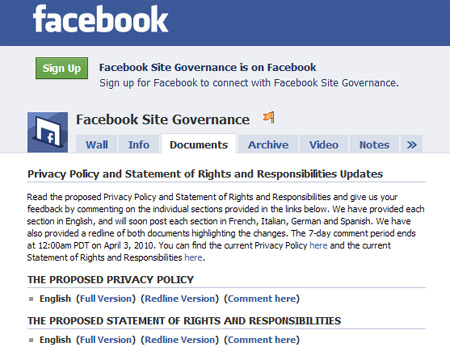 Then the other changes could be better defined as clarifications; Facebook’s mostly just trying to make sure users understand how existing mechanisms work.

Still, this is some potentially drastic stuff.  It’ll be interesting to see how users react as Facebook reveals more details (perhaps at the f8 conference next month).