When the beta version of Facebook questions debuted in the summer of 2010, it was large and in charge – of your news feed that is.  Yes, the old Facebook Questions got to be sickeningly annoying to this writer.  Today, the official Facebook blog announced an update and relaunch of the mostly forgotten feature.

When Facebook announced the beta Questions in June 2010, they made it clear that it was meant to become a giant database that was full of questions and answers from the entirety of Facebook that could be browsed by keywords.  They even wrote a disclaimer warning just how public the Questions content was going to be:

Keep in mind that all questions and answers posted using the Questions application are public and visible to everyone on the Internet. If you only want to ask a question to your friends or a specific group of people, you can still pose it as a status update on your profile targeted to those people.

The new Questions is based around your friends, and possibly your friend’s friends.  Look at the difference between the blog post above and what was said today about the feature:

Friends are often the best source of advice when you’re trying new things: Where should I go to dinner? How do I go buy a car? What new music should I check out? Friends know your tastes, and you have confidence in their opinions…for more unusual questions, you can get advice from a broader group of people, but to keep it most relevant we filter the answers to show you first what your friends think. You can see more responses by clicking “others” within the question.

The new Questions allows you to pose questions of your friends that can be either answered in long-format or you can provide a multiple choice answer box – or both.  The multiple choice option ends up working like a poll that keeps track of how many votes each answer has received and who voted for them.  They will then organically appear in your news feed.  As you can see below, there is the opportunity to answer both useless and though provoking questions in the same breath. 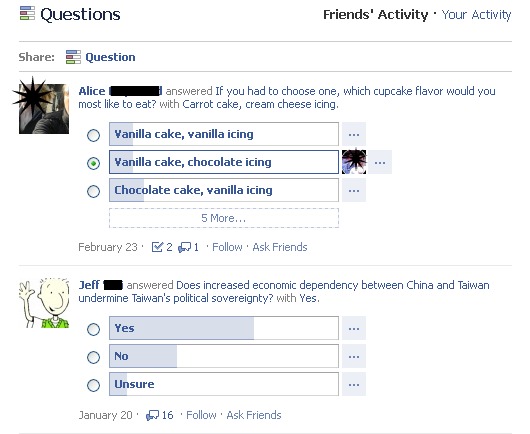 If you want to comment or simply see other people’s comments about the question, you are directed to a little pop-up.  You can filter what comments you see by friends or everyone. 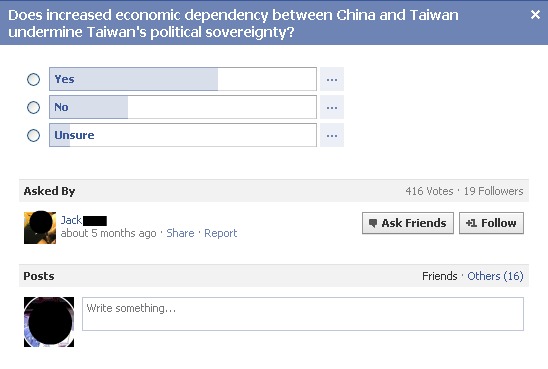 It appears that Facebook wants questions to truly become as much a part of the service as status updates or photo uploading, as it has added the option among the top of your feed.

I’m not sure how many times I’ll have to be asked who my favorite Backstreet Boy was before I get angry and throw my monitor, but the new format could prove to be helpful in finding a good restaurant in a new city or in deciding which movie to see over the weekend.