Facebook shared some things with us that it is doing to help people vote in the upcoming elections. "Tomorrow is Election Day and Facebook is committed to encouraging people who use our service to participate in the democratic process. As a result, Facebook is focused on ensuring that all of our users know where they can participate in this year’s elections," Facebook’s Andrew Noyes said in an email.

"U.S. users over age 18 will see a message at the top of their Facebook News Feed reminding them that it is Election Day and to go vote. The Facebook News Feed message will also contain a link to the Facebook Polling Place Locator, an application that lets users find out where they can vote," he said. "The app was developed with data from the non-partisan Voting Information Project  and was built by the app developer Involver." 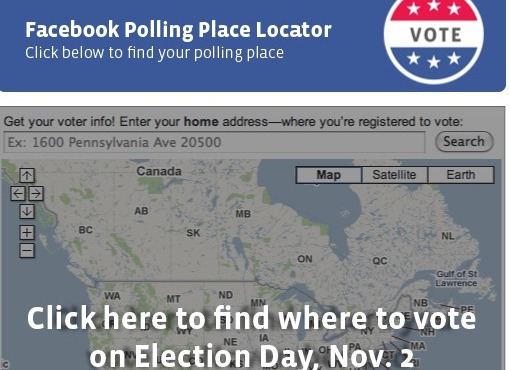 Facebook users over 18 will be able to click an "I Voted" button and post a story to their wall. This will appear in their friends’ newsfeeds, hopefully encouraging them to vote as well. Users will see the names and faces of friends who voted as well.

"Additionally, a real-time counter will show the number of people in the United States who clicked the ‘I Voted’ button," said Noyes. "In 2008, more than 5.4 million people clicked the "I Voted" button and we are excited to see how many users participate this year."

Facebook’s U.S. Politics page (introduced earlier this year) will serve as a hub for election info throughout the day.

Twitter Provides Election Info In a Variety of Ways