Facebook announced today that it has started a new version of its privacy policy to make it easier to understand. I could’ve swore they did that before, but now they’re going even further. This one is relying on user feedback before the company even considers implementing it. Facebook says if users like it, they’ll consider making it the official policy.

"It’s important to note that this draft is outside of even our regular process of notice and comment," the company said in a note. "Because we’re tackling a challenge that matters to so many people — and doing it in a way that is so different from what we’ve done before —  we’re giving you a look even earlier in the process. If people like what we have, we’ll put it through our regular notice and comment process at a later date."

"Finally, we’ve tried not to change the substance of the policy but, in our effort to simplify, we have added some new things that were elsewhere on the site (like our help center) and have made some other concepts clearer," the noted added.

Facebook says the new policy should be easy to understand, visual and interactive, and should focus on questions people are most likely to ask. 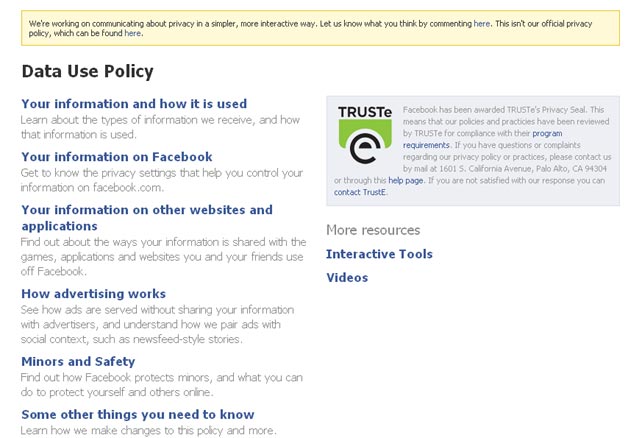 The company says it plans on "more innovations" with regards to privacy in the coming months, but would not get into specifics.