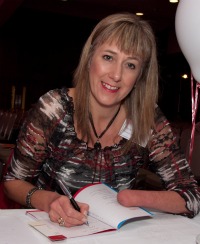 People who have a sexual interest in amputees actually have an official term – they are called Acrotomophiles, from the Greek words for extremity and to cut. They often times refer to themselves as “devotees.”

Fielder said that after her pic was posted on the website, she received a flurry of men who contacted her via Facebook. She told the BBC that most of these men were from the U.S. and many “pretended to have missing limbs” and tried to friend her on the social networking site.

Although she just talked to the BBC, the incident apparently happened a while ago. Last year, on her blog “Shared Experiences” which is linked to on her Facebook profile, she details what happened in more detail:

However, as good as the internet and facebook is at putting me in touch with parents it has also exposed me to a side of life I didn’t even know existed and that is the ‘secret world of a devotee’. I’ve found to my horror that there are men (and it’s mostly men) who are sexually attracted to women with missing limbs and will do anything to start up relationships with women with stumps.

Their fixation is so great that some resort to adopting fake profiles on facebook i.e. they pretend that they are also a woman with a limb deficiency. I was taken in by a few such people and discovered some of my photos had been uplifted and posted on dubious sites.

When I found out I wanted to close down my facebook account and take a hammer to my computer. It took me a good few weeks to accept that such people exist and understand more about how they choose to behave. I’ve now made my peace with the simple fact that whilst ‘Mr Main Stream’ might be a ‘tits or legs’ man that there is a minority of men who feel their pulses race at the site of a shapely stump. I’ll leave the topic of devotees at this point as I’m certainly not seeking to normalise their behaviours or give them a platform. I don’t like being pestered by devotees, but they’re out there and there is little that can be done about it.

Apparently this hasn’t only happened to Fielder. In the BBC interview she says that in her experience, most female amputees have experienced their photographs being used by “devotee” websites.

It’s just a cold hard fact of the internet that with greater visibility comes the risk of over-exposure. There’s no telling where some of your online photos end up – could be anywhere. Facebook has the feature to disallow the downloading of photo files, accessible through the privacy options. But anyone with half a brain knows that a screencap and the simplest editing software can bypass that measure with almost no effort whatsoever.