Face.com, the developers of the facial recognition technology behind Facebook apps like Photo Tagger and Photo Finder announced that it is opening up its API, which will allow developers to take advantage of this technology anywhere on the web. We had a chat with Face.com founder Gil Hirsch, who talked about the technology, the API, Facebook’s Open Graph, and what kind of apps we can expect to see around this API.

Basically, the API allows third-parties to utilize the technology behind Photo Finder and Photo Tagger to create new and unique ways of utilizing facial recognition. Face.com has scanned billions of photos and tagged over 50 million users through these two apps. Between the API and Facebook’s Open Graph initiative, imagine how many more will be scanned/tagged.

"What it means for us, is you can now apply facial recognition on your social graph," Hirsch tells WebProNews. You can take the functionality to other websites. "You can take it outside the walled garden [of Facebook]." You can ID your Facebook friends in Picasa or Flickr photos for example.

Hisrch says he’s heard two to three hundred people have ideas for what they wanted to do with the technology before they even opened up the API. These things range from retail apps to e-cards, and campaign managers wanting to personalize campaigns. "Everyone came up with a different idea," he says.

The company has some sample apps set up to give developers an idea of the kinds of things that are possible. One such example is the Tagger Widget. This lets users add a Face tagging interface to any image on a webpage. It automatically places tags on people’s faces, and allows users to add names.

Another example is PosterYourself, which lets you inject your Facebook friends’ faces into images for things like e-cards, posters, and other creative apps: 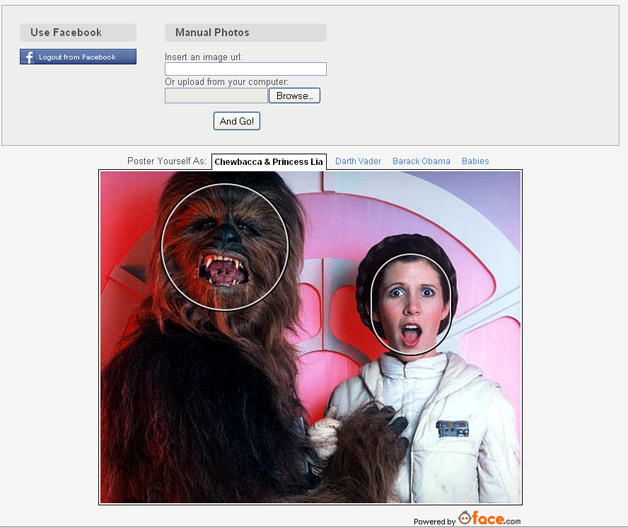 These are just a couple of examples. There’s no telling what we’ll see developers actually do with this technology. Technorati Founder Dave Sifry is already utilizing the API for some apps. He says, "I’ve been impressed with Face.com’s API, and their plan for working closely with developers to build great applications   that incorporate face detection and face recognition. Open platforms like this one will enable the creation of exciting new applications that we’ve never seen before at scale."

Facebook’s Open Graph has already caused a great deal of concern over privacy. It will be interesting to see if any such concerns are raised over this, with people’s faces are coming into play (though that was really already happening through Facebook itself).

"Privacy is something from day one we’ve put in everything we do," says Hirsch. He says Face.com applies the same logic that applies inside of Facebook. You can only ID people within your social graph. He says they enforce that through verification through valid Facebook or Twitter sessions. You can’t just do people who aren’t your friends.

The idea behind this API is that people will create more engagement around photos all around the web, Hirsch says. A lot of people ask him if it can be applied to security strategies, but Face.com is more focused on the consumer world, and applying its technology to consumer apps – not security.

Face.com does have a product that can help you monitor where your Face is being used, however. It’s had "Face Alerts " for a while. Think about this as Google Alerts for images of you.