It appears Facebook may want users to do more with photos, as leaked images and documents suggest that the social network is on the verge of unveiling its own photo sharing app for the iPhone.

TechCrunch has obtained “roughly 50 MB of images and documents outlining the entire thing.” According to their post, the new photo sharing app looks incredible. The words used are “killer,” “awesome” and “amazing” – so that sounds promising. 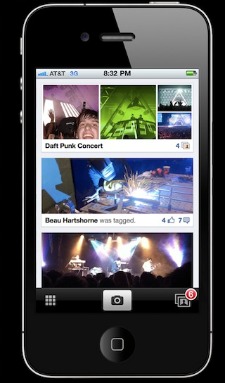 The app, possibly titled “Hovertown” or “Withpeople,” is built on Facebook’s social graph but looks to be a standalone application as of right now. It’s likely that the app would be integrated into the Facebook iPhone app and even the main website eventually.

TechCrunch says that it looks like a hybrid of Path, Instagram and Color, which is pretty exciting to me considering how much of an Instagram fan I’ve become as of late. If that’s the case, the new app would promote seamless sharing with public groups, private groups and would contain cool filters and stuff, right?

This all sounds awesome, but I hope the photo sharing app works better than the actual Facebook app for iPhone. I’m only speaking from my own personal experience, but I’ve found that app to be a buggy mess at times.

And if this new app is launched relatively soon, one can only imagine it will be talked about as some sort of response to the news that Twitter will be deeply integrated into iOS 5. That move, as discussed, could change the world of mobile application development on the iPhone.

A couple of weeks ago, Twitter announced its partnership with PhotoBucket to provide users with a native photo uploading service. This will allow users to upload photos and attach them directly to their tweets without using a third-party service like yfrog or twitpic.

25 Ways to Get Another Site to Link to Yours