Facebook defines itself as something that "helps you connect and share with the people in your life," and now more than ever, it looks like folks are sharing videos.  Brightcove and TubeMogul determined yesterday that Facebook passed Yahoo in terms of video streams referred during the third quarter.

To be clear: the difference wasn’t large, and Google’s still in the lead by a huge margin.  Bing and Twitter aren’t entirely out of the running, either.

But a post on the TubeMogul Blog stated, "Facebook now refers more video streams than Yahoo! for the aggregate media sample.  This marks the first time the social platform has surpassed the search engine and content portal.  Facebook accounted for 9.6% of all referrals, making it second only to Google." 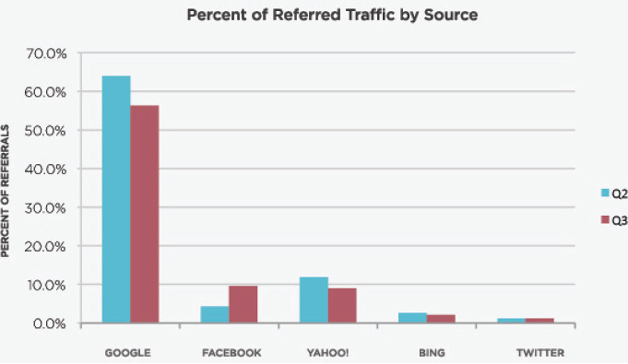 What’s more, Facebook referrals seem to be worth more in terms of keeping an audience’s attention.  Brightcove and TubeMogul’s quarterly research report explained, "Facebook was the most engaging referral source for entertainment categories, including broadcasters (1:57 minutes) and magazines (1:34 minutes)."

These stats may help Facebook attract more advertisers and therefore pull in more revenue.  They could also cause marketers to become more active on the site (which could be either good or bad depending on one’s point of view).