Social media sites like Facebook, MySpace, and YouTube continue to polarize corporations and people in charge of networks, judging by a new report from OpenDNS.  The sites showed up on both "top blacklisted" and "top whitelisted" lists covering the entire year of 2010.

If you’d like a definition of those terms, OpenDNS said in its report, "Blacklists are typically used when there is no desire to block an entire category in principle, but there is a focus on preventing traffic to specific websites based on a combination of their popularity and content.  This top ten list suggests a concern with the use of bandwidth by streaming sites and with privacy concerns from advertising networks."

Then the company added, "Whitelists are typically used when there is a desire to block entire categories, but access to selected websites is granted on an exception basis.  These sites represent the most trusted sites in their category." 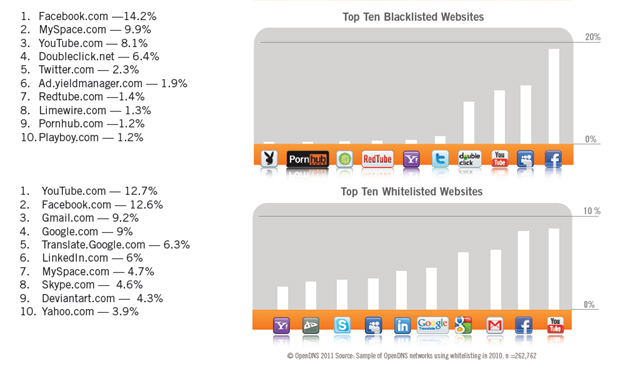 All sorts of interpretations seem possible as a result.  An unpleasant one for Mark Zuckerberg: perhaps companies like Facebook less than Playboy.  Or, to head in the other direction, maybe the average office worker prefers Facebook to Playboy, thereby necessitating the "blacklist" response.

Either way, the sites appearing on these lists can at least argue that they’ve succeeded in attracting everyone’s attention.  And home usage is likely to be high as a result, since blacklists and whitelists can’t restrict everyone’s browsing all the time.

Will You Be Paying Restaurant Checks with iTunes This Year?