Some mobile phones don’t do much more than make and receive phone calls and texts.  Others almost function as pocket-sized computers.  But engineers have now made interesting changes to Facebook’s primary mobile site (m.facebook.com) that should allow it to better serve all users.

People with modern smartphones shouldn’t worry that this is a step backward; Facebook hasn’t decided to simplify everything for the sake of a few devices that would be better off in museums.  Interfaces are in fact supposed to stay about the same or even improve. 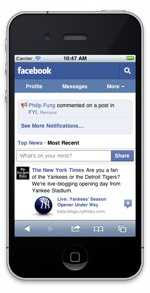 Lee Byron, a product designer, explained in an official note, “With the new m.facebook.com, users with high-end touch devices will see a rich touch-friendly interface; for users with feature phones, the site will look and work great.”

Then Byron continued, “Every device uses the same framework.  This way we can move even faster and build new features just once for every mobile device.  It also means that everyone can access the same features, whether writing messages or checking into Places.”

That should please folks who tend to get left behind, and it should help Facebook catch on in places (perhaps whole countries) where smartphones aren’t too common.  It seems bound to result in people visiting the social network more often, as well, once the new site fully launches.

Look for the upgraded m.facebook.com to roll out over the next month or so.  Byron, meanwhile, expects the change will allow him to delete “tens of thousands of lines of old mobile site code.”

Creepy Takes the Work out of Stalking