Win-win-win situations don’t crop up too often, but Facebook and McAfee seem to have orchestrated one on a very large scale.  The two companies announced this morning that they’ve partnered to provide Facebook’s users with free security software.

Any or all of Facebook’s 350 million users can now visit the "Protect Your PC" tab on McAfee’s Facebook Page, and for nothing at all, download a six-month subscription to the McAfee Internet Security Suite.  Then, if they stick with the software beyond six months, they’ll receive a discount.

This could go a long way towards keeping a lot of people’s computers safe. 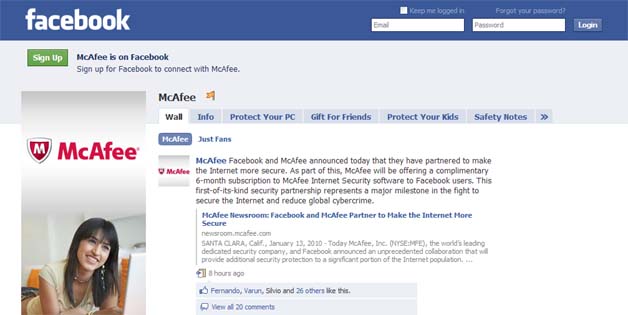 Facebook’s reputation is likely to improve as a result of the move, too, of course.  A few nasty links or scammy applications floating around the social network won’t seem like much compared to a grand gesture like this.  And McAfee will no doubt pick up at least a handful of paying customers as people stick with its software out of loyalty or laziness.

The McAfee Internet Security Suite offer is available to Facebook users in Australia, Brazil, Canada, France, Germany, Italy, Mexico, the Netherlands, Spain, the U.K., and the U.S. at the moment, and users in other countries may get the opportunity to take advantage of it in the months ahead.

Netflix To Be Available On The Wii This Spring