Facebook has launched a new U.S. Politics page, which highlights the use of Facebook by politicians and campaigns, and according to an update on the page, shares tips and best practices, and news from Facebook. Facebook Public Policy Communications Manager Andrew Noyes emailed us with the news, which he notes is "just in time for the peak of the 2010 political campaign season."

"The page will highlight how politicians, elected officials, and political campaigns across the United States are using Facebook to better connect with citizens," Facebook says. 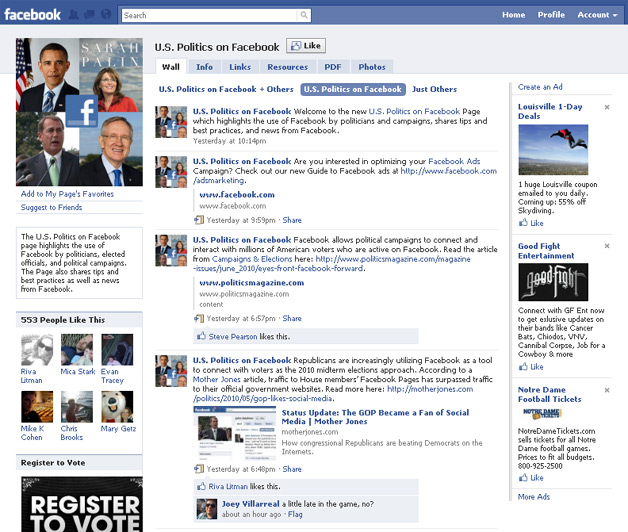 –  Political figures consider Facebook critical for communicating and connecting with the social network’s more than 400 million users, 100 million of whom are located in the United States.

–  In the 2008 election, Facebook helped register nearly 60,000 voters; nearly one million people used a Facebook application to remind friends to vote; more than one million voters used Facebook to find their polling location; and more than 5.5 million users told friends that "I Voted" on Facebook.

–  Political campaigns are using Facebook to organize and communicate with voters in a way unimaginable a decade ago.

–  Candidates are using Facebook as an increasingly important resource to reach voters directly, without having to go through the traditional media filter or pay for television and radio ads.

–  Voters increasingly expect to be able to interact and examine candidates on Facebook and share political views and information with their friends.

Earlier this year, Facebook made it a point to highlight how you can set up Facebook to be your news destination by creating a "News" group and adding pages from your favorite news organizations. Facebook’s appears to want to be integrated with nearly all of your online experience and news is certainly no exception. This new Politics Page is just the latest extension of this.

On a somewhat related note, former president George W. Bush launched his own Facebook page today, sparking a great deal of conversation throughout the Blogosphere.