Consider this a follow-up piece to my previous “warning” that Facebook is turning your children into narcissistic idiots.

With that article, I told you about a psychological study that warned of the effects that social media sites like Facebook can have on young, impressionable kids. That study found that teens who use Facebook often show more narcissistic tendencies as well as signs of antisocial and/or aggressive behaviors. It also concluded that students who checked Facebook during 15-minute “study” periods achieved lower grades.

Is social media to blame or has it just become the convenient scapegoat? Let us know what you think.

In a perplexing find, the study also said that young adults who spend a lot of time on social media sites are better at showing empathy to their online friends.

Now, a new survey is linking social media use to an increase in drug and alcohol use in teens.

The 16th annual “back to school” survey performed by the The National Center on Addiction and Substance Abuse at Columbia University (CASA) asked around 2000 teens and 500 parents about their drug and alcohol use as well as their social media use.

Out of the survey population, 70% said that they spend time on a social networking site every day. According to CASA, these teens are much more likely to use tobacco, alcohol, and marijuana than the 30% who reported no social media use. 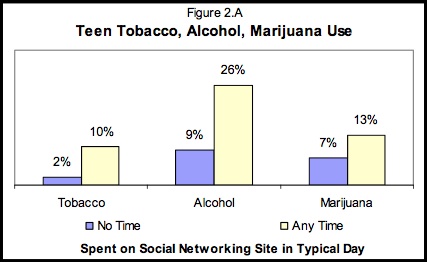 As far as the relative amounts of time spent on Facebook, Twitter and others, CASA had this to say:

Of course with any finding like this, the first question is always an issue of actual causation. Is social media use actually making the kids smoke and drink more? Or are the kids who smoke and drink at a higher rate simply more social media savvy? The CASA report outlines a specific reason that they believe is behind the increase in drug and alcohol use: Influence.

The survey found that 40 percent all participants have seen pictures of peers “drunk, passed out, or doing drugs” on Facebook or other social media sites. Of those teens, 49% saw those pictures at the age of 13 or younger. By the time the kids had reached 15, 90% had seen such an image.

Apparently, Facebook is just a modern day enhancement of the “everybody’s doing it” argument for teens.

The questions regarding this survey are the same as those regarding the survey I mentioned earlier. Is Facebook and other social media really to blame? Or does it simply mirror what is already a reality? Are teens that use drugs and alcohol just more likely to use social media?

I’m pretty skeptical of the social media-boogeyman stories. Do you believe in all the reports that say Facebook is having a negative influence on society? Let us know in the comments.