Update 3: Facebook has now tweeted saying, "Facebook is available again after being down for a brief period. We apologize for the inconvenience." 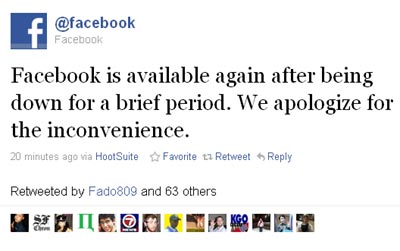 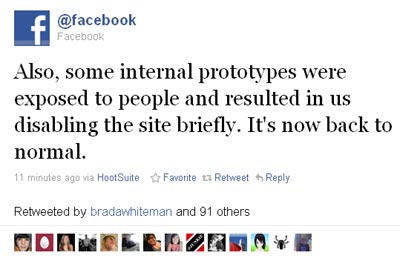 Guess it was page related after all.

Update 2: It seems, as a commenter points out, that Facebook is still down for some people. Tweets continue to roll in to that effect. (5pm Eastern)

People are taking jabs at Mark Zuckerberg for being person of the year now.

Some are saying they were seeing the new page designs before the outage (though we never saw it on ours), so something likely went wrong with the rollout.

Update: It’s back up. It’s rare for FB to go down like that, but to the company’s credit, the outage didn’t last too long, especially compared to MasterCard’s recent two-day outage.

For the record, I’m not seeing this new Page design yet either.

Original Article: Facebook appears to be down, at least for many people. We’re seeing a lot of chatter about it on Twitter.

As Twitter user DJDearest says, "Facebook is down. Productivity at offices across the world just went up 356%."

We don’t know if it has anything to do with the recent "Anonymous" attacks, but Facebook did recently take down their Facebook Page. Although, Twitter took down their account too, and given Twitter’s reputation for downtime, you would think it would be down also.

Here is a sample of what some other people have to say about it on Twitter: 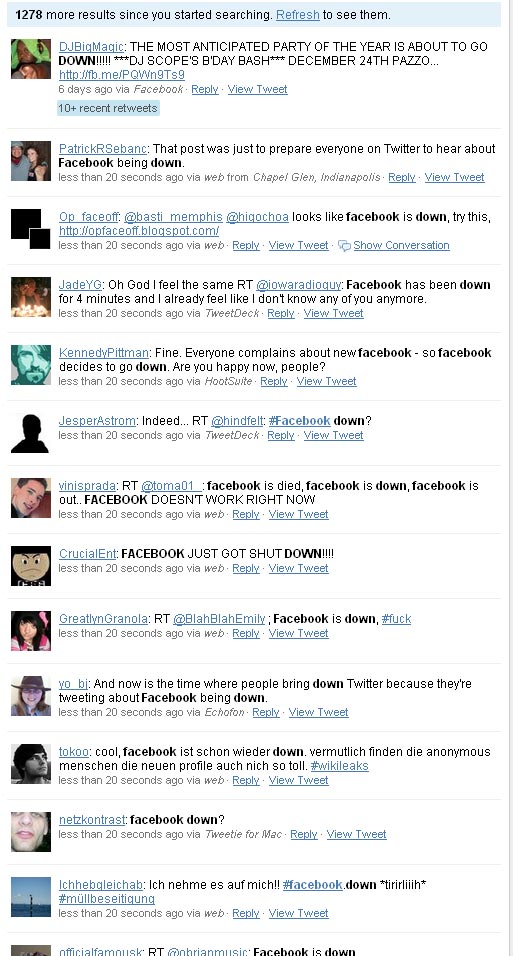 It’s very unusual for Facebook to go offline like this, unlike say Twitter. No Fail Whales to look at though.
Mashable speculates that this is tied to a rollout of redesigned brand pages.
I wonder how much money Facebook is losing while this is going on.