Facebook is now giving users a way to better filter their news feeds so they can really see the content they want. In the past, users have been able to choose whether they want to view "top news", which is a collection of updates that Facebook has deemed most important for you to see based on various algorithmic factors, or "most recent", which just showed you everything in reverse-sequential order.

Now, the "most recent" link is accompanied by a dropdown menu that provides users with more options: status updates, games, photos, links, pages, and lists that the user has created. So, if you want to just see all the links people have shared, you can look at those. If you want to see status updates only, you can do that. 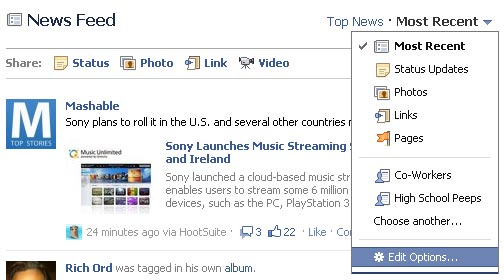 The feature could actually get people using Facebook’s lists feature more. Mark Zuckerberg said that nobody uses them, when the company announced its Groups product recently. If users are presented with the option to view the lists right from their news feed, they may be more inclined to set more up and look at them more.

Facebook design changes are often greeted with a lot of criticism from users, but it’s hard to imagine anyone having a problem with this change. It simply gives the users more options, and the default is the same as it has been ("most recent" being the starting point.

Will you use these new news feed options? Will you create more lists now?

Google Has a New Social Experiment