Earlier today, we reported that Facebook beat Google in terms of UK traffic over Christmas.  We also reported that Apple upped its sales forecasts for iPhones.  Now, to perhaps link the two stories together, it turns out that the Facebook for iPhone app gained around 1.6 million users in the past three days.

Considering how long Facebook, the iPhone, and the Facebook for iPhone app have all been around, growth of this sort is fairly astonishing.  It’s easy to imagine most or all of the potential user base would already have been exhausted.

Even put into context (see the graph All Facebook constructed from official data below), the growth is pretty much unprecedented.  Although the Facebook for iPhone app has a strong track record of attracting users, hockey stick-style increases haven’t occurred for a while. 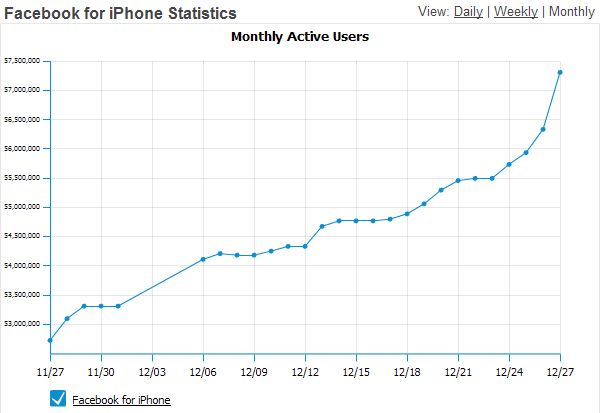 Still, this counts as more concrete evidence that Christmas was quite good to Facebook.  Chalk it up to people playing with iPhones they found under the tree, or maybe just taking a few moments out of their day(s) off to explore an old phone’s capabilities.

By the way, if you’re curious, it turns out that the Facebook for Android app -while growing fast – only has about 20.9 million monthly active users right now.