What is a Facebook fan worth? It’s a question that many have attempted to answer. These answers are often greatly debated. Can you place a set value on a Facebook fan?

The latest attempt comes from Experian Hitwise. “We are constantly asked: ‘What’s the ROI with advertising on Facebook?’ and until now that has always been a difficult question to qualify precisely,” says the firm’s Research Director in the UK, Robin Goad. “Leveraging our unique data sets we now have an answer: for retailers, each new fan acquired on Facebook is worth 20 additional visits to your website over the course of a year.”

How much is a Facebook fan worth? Tell us what you think.

“Our data shows that for the top retailers, even if they have no Facebook fans they can still expect to receive on average 62,000 visits from Facebook each month,” says Goad, plugging a new service the firm is offering, called Facebook Fan Acquisition and Analysis. “Within retail each new fan acquired will drive an additional 20 visits to a retailer’s websites, which in turn will generate extra sales both online and offline.”

“The figure of 1 fan = 20 extra visits to a website uses a unique methodology that combines Hitwise data with data from Techlightenment,” he says. “We took the top 100 retailers ranked in the Hitwise Shopping and Classifieds category and benchmarked visits to those websites against the number of fans those brands had on their Facebook page. We then also looked at the propensity for people to search for those retail brands after a visit to Facebook using our Search Sequence tool.”

A study (about a year ago) from Syncapse found that people who are Facebook fans, on average, spend $71.84 more per year on brands they are fans of than those who are not fans. In addition to that, they’re 28% more likely than non-fans to continue using that brand. Michael Scissons, the CEO of Syncapse, talked about the study on the Fox Business Network:

“For shares and tweets, we were able to directly attribute sales to the original action, so we simply took the total revenue attributed to each action and divided it by the total number of shares/tweets,” the firm said. “For likes and follows, we had to estimate attribution by looking at our traffic references and subtracting out purchases made through shares/tweets as well as purchases made through direct traffic.”

Last year, a study from Virtue found that Facebook fans are valued at $3.60 each in earned media for brands. The study was debated, but interesting nonetheless. “Despite the formula flaws, I do think it’s a good start to something many marketers are looking for – i.e. what’s the return on investing budget and human capital on a Facebook fan page?” wrote Yahoo Sr. Manager of Community Marketing Michael Brito in an article we ran about the study. “In fact, working on the brand side for many years, this question arises daily.  And, the reality is that we may never know the true value of a fan because human behavior changes all the time and technology isn’t quite there yet; not to mention the possible privacy implications.  I do feel that calculating fan value needs to involve more than just impressions.”

Feel free to poke all the holes you want in any of these studies. Augie Ray at Forrester Research once wrote on “why the question of Facebook fan valuation is problematic”:

Of course Facebook has continued to grow tremendously since most of these even came out, and user behavior has also changed (strictly in the sense that you can’t assume that everybody is using Facebook exactly the same way they were using it a year ago) so even if it was dead on, it’s possible that things have changed.

The “Filter Bubble” is worth considering. This is a concept we discussed in an article earlier this week, based on a TED talk given by Eli Pariser. Basically, this is about the content we consume becoming more filtered because it’s being tailored to us on a personalized level by the sites we use – including (and especially) by Facebook. Pariser quoted Facebook CEO Mark Zuckerberg as saying, “A squirrel dying in front of your house may be more relevant to your interests right now than people dying in Africa.”

Zuckerberg’s point is that Facebook wants to give you the information most relevant to you. It does this by not showing you everything from all of your friends and Pages in the news feed. In terms of Facebook fans for a page, it’s worth considering that all of your messages might not find their way to all of your fans, simply because Facebook may filter some of them out of their news feeds. You can’t expect all of your fans to go to your page on their own on a regular basis.

There are ways to improve your chances of getting in the news feed. In another recent article, we discussed “EdgeRnak,” which is the basis for Facebook’s News Feed algorithm. A report from Buddy Media, which has built a business out of creating Facebook tools for businesses, and counts many major brands among its clients, provided these tips to keep audiences engaged. Posts with higher engagement are more likely to appear in the News Feed:

In social media in general, you might say you get back what you put in. Earlier this month, we ran an article from Brian Solis, who said, “Social media is as effective as its design. The ability to deliver against brand lift, ROI, or an established set of business and operational metrics and KPIs is all in the design. I believe you can not measure what it is you do not, or do not know, to value.”

He pointed to a study from Vocus and MarketingSherpa, which looked at the effectiveness of various social media marketing tactics, finding that effectiveness very much reflects the degree of difficulty for different strategies. In other words, it’s probably not going to be as effective if it’s really easy, but if it takes more effort, it’s likely to work better. Here’s a graph from the study that illustrates this: 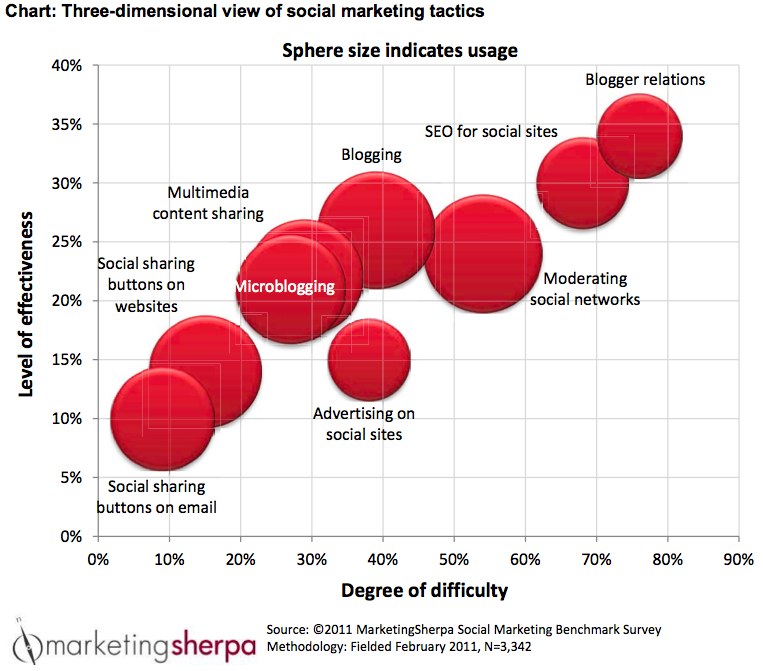 1. Start by understanding who you’re trying to reach and what it is they value

2. Design programs that meet the needs of each segment

3. Dissect the keywords and clickpaths of your desirable segments and develop a thoughtful SMO program

4. SMO is only as effective as the content and destinations its meant to enhance. Develop content and click paths that matter and deliver value on both sides of the transaction.

5. Identify the individuals and organizations that influence your markets. Learn what it is they value and develop engagement programs that offer tangible value (what’s in it for them and their audiences).

In reality, it’s hard to say with any confidence that every Facebook fan you have is worth a set amount of money to your business. People may even forget that they even “like” your brand over time, if it’s not appearing in their News Feed frequently. That said, it does seem pretty clear that there is value to be had in Facebook fans if you’re willing to engage them and give them reasons to value you. Value isn’t a one-way street.

Maybe you should look at the brands you “like”. Why do you like them? What’s in it for you? If you have a good reason for “liking” a Page, they’re probably doing something right. Are you doing the same things right as a reflection of your own brand? Do enough things right, and the value of “liking” your page will go up for the consumer, which in turn is bound to make that consumer more valuable to your business.

What’s a Facebook fan worth to you? Let us know in the comments.

How OpenFeint Hopes to Change the Mobile Gaming Industry