For a long time, supporters of Google’s experiments in social media were able to point to Orkut’s success in Brazil and India.  In those countries, at least, the social network was dominant.  But Orkut fell behind in India last year, and new stats from Experian Hitwise show that Facebook’s made impressive gains since then.

With a share of 5.26 percent, Facebook now ranks as the third most popular site in India in terms of visits.  Only Google India and Google command higher visits shares (11.13 percent and 7.61 percent, respectively), which is hardly anything for Mark Zuckerberg to feel bad about. 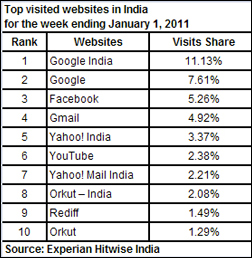 So it’s safe to say that Facebook’s in pretty good shape.  An Experian Hitwise representative observed in an email to WebProNews, "The site accounted for more than one third of all Indian visits to social networks . . . picking up over twice as many visits as second placed YouTube."

This represents a tough loss for Google, further calling its social media competence into question.

A hat tip goes to Akanksha Awal, in any event.

Android Tablets and the iPad's Lead in the Enterprise