After just a week, 50,000 sites across the Web had already implemented the new Facebook social plugins announced at the company’s recent developer conference F8. By now, that number has no doubt grown significantly.

We’ve written about Facebook’s announcements and these plugins numerous times, but while we’ve been mostly talking about their implications and what they could mean for your business, some sites are already seeing a great deal of value right of the bat.

Mallary Jean Tenore at Poynter.org spoke with Jonathan Dube, vice president in charge of ABCNews.com about the implementation of the plugins, and he said, "We’ve seen an over 250 percent increase in referrals from Facebook to ABC News since the launch of the Social toolkit on ABCNews.com."

"We’ve opted to place the Facebook recommendations higher than the most popular recommendations, and the reason we’ve done so is because we believe that recommendations from people who are friends of yours are probably more likely to be stories that you’re interested in than a general ‘Most Popular’ list," said Dube. (HT: lostremote) 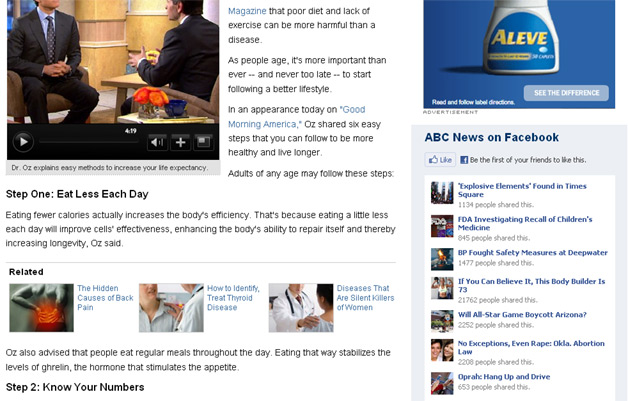 Sidenote: Of course there are plenty of ways to use Facebook that existed before the company’s recent announcements. WebProNews discussed some of these with Greg Finn of 10e20 at SMX West a while back:

While publishers are ecstatic about the opportunities they are getting from Facebook’s new plugins and Open Graph initiative, not all of Facebook’s users are so upbeat. Privacy concerns have of course been in the headlines a lot since F8, and they have even led to Facebook losing some of its users.

Border Stylo’s Dan Yoder has an interesting top ten list of reasons to delete your Facebook account, and some of Google’s team have publicly opted to deactivate their Facebook accounts, but whether this is due to actual concerns or to personal protest to a growing competitor is hard to determine.

It’s hard to say if Facebook will lose enough users to amount to any significant number, but my guess is that it won’t – at least not anytime soon. I’d be surprised if they are not gaining more users than they’re losing. As Facebook takes over more and more sites, non-Facebook users are more likely to get sucked in.

Out of Facebook’s 400 million+ users, I’m guessing a substantial amount of them like the social network too much to give it up, and aren’t really concerned about sites having access to information like what bands and movies they like. Many are way too invested in Farmville to stop now.

May 3, 2010
Latest Posts
Registration is disabled.