Facebook users have long begged for a dislike button, because honestly, there’s a whole lot of content to dislike in the News Feed. Facebook has always resisted, however, opting not to spread negativity throughout the world’s largest social network.

Well, they’re letting in a little bit of negativity now. No, they haven’t given users a proper like button, but they’ve added the thumb-down option to Messenger to go alongside the recently added thumb-up. It’s one of the app’s stickers, which are essentially emoticons, but hey, at least it’s something.

People were hoping for a way to dislike things when Facebook launched the Open Graph, but the company went so far as to block the action:

Recognizing the collective yearning among Facebook users for a dislike button, scammers tried to fool people by encouraging them to install one. 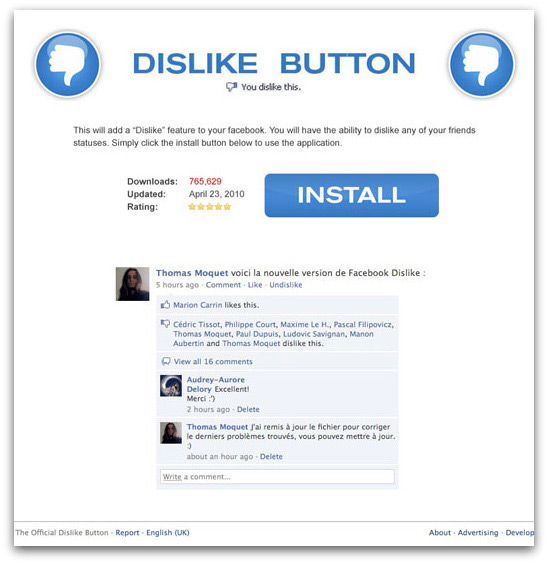 2011 saw the release of the dislike stamp from ThinkGeek:

Earlier this year, a Facebook product engineer talked about the lack of an official dislike button in a reddit AMA (ask me anything).

“Actions on Facebook tend to focus on positive social interactions,” he said. “Like is the lightest-weight way to express positive sentiment. I don’t think adding a light-weight way to express negative sentiment would be that valuable. I know there are times when it’d make sense, like when a friend is having a rough day, or got into a car accident like my sister yesterday (she’s okay!). For these times, a nice comment from a friend goes a long way.”

That’s true, but a hurtful comment from a “friend” can do a lot of damage too.

It does seem that Facebook is considering letting people express themselves in more ways these days. A “sympathy” button was recently developed at a Facebook hackathon, and it’s apparently not out of the question that we could see one some day.

These are part of a free sticker pack available in the sticker store in the Messenger app. Once you download it, you can also use them from the desktop in any Facebook private messaging conversation.

We have to assume that Facebook will be monitoring the use of these new stickers. Perhaps if enough people use the dislike button often enough, Facebook will launch a real one. This could be wishful thinking, but Facebook watches pretty much everything you do. It’s even using data from messages you type, but don’t actually post. Why not get some solid Facebook dislike data?

Christina Aguilera and Lady Gaga Sing on 'The Voice'