Less than two months after Facebook made its decision to open a sales and operations office in Austin, Texas official, the company is on the move again.  Facebook’s announced that it next intends to open a small engineering office in Seattle, Washington.

This will perhaps not be a huge deal; Seattle Mayor Mike McGinn said in a statement that Facebook’s only looking for an office that will accommodate 30 or so employees.  On the other hand, any expansion out of Palo Alto is a sort of new and exciting thing at this point in the company’s history.

Also, it looks like Facebook is trying to move quickly here, as the office is supposed to open this summer. 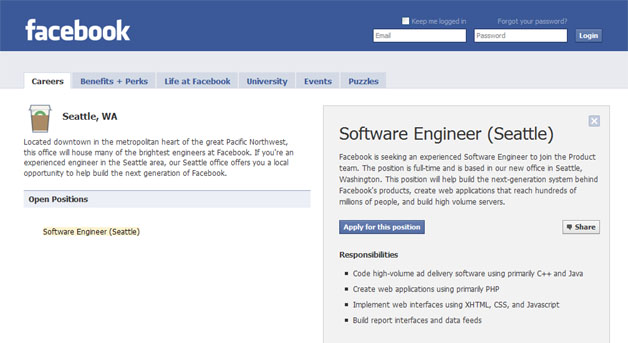 Then here’s one more interesting detail concerning this development: an engineering manager wrote earlier today, "To help recruit a local team of ‘super-star’ engineers, we’re also announcing that Hadi Partovi will be joining Facebook in an advisory role.  A serial entrepreneur who has worked with many of the groundbreaking companies on the Web, Hadi is a great addition to the Facebook team."

Good luck to everyone else who submits an application.