The majority (80%) of American Internet users participate in groups, compared with 56 percent of non-Internet users, according to a new report from the Pew Internet & American Life Project.

Social media users are even more likely to be active: 82% of social network users and 85% of Twitter users are group participants. 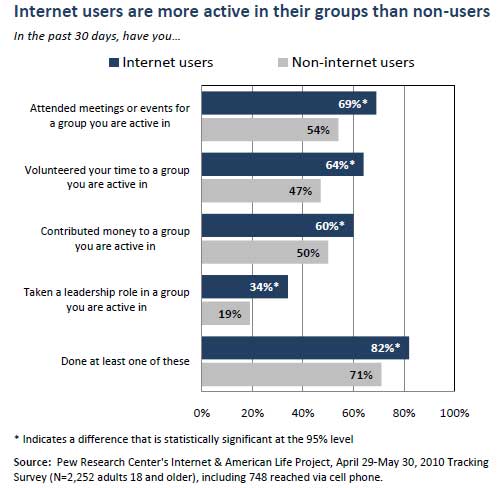 Some of the most intense users of technology for group activity are social media users, such as Facebook and Twitter users, and many groups now conduct a portion of their activity on those sites. In this survey, 62% of online adults use social networking sites and 12% use Twitter.

Groups are moving aggressively into social media spaces to connect with members:

“Use of the internet in general, and social media in particular, has become the lubricant for chatter and outreach for all kinds of groups ranging from spiritual communities to professional societies to ad hoc fan clubs,” said Lee Rainie, Director of the Pew Internet Project and one of the authors of the new report on the findings.

*24% of those active in groups say they discovered at least some of their groups on the Internet. However, three times that number of active group members (75%) did not discover any of the groups they belong to online.

*23% of Internet users say the technology allows them to spend more time with their groups.

“One of the striking things in these data is how purposeful people are as they become active with groups,” noted Kristen Purcell, the research director at Pew Internet and co-author of the report.

“Many enjoy the social dimensions of involvement, but what they really want is to have impact. Most have felt proud of a group they belong to in the past year and just under half say they accomplished something they couldn’t have accomplished on their own.”

LinkedIn's Board Of Directors Gets New Member