More than a quarter (30.8%) of smartphone users accessed social networking sites via their mobile browser in January, up 8.3 points from 22.5 percent one year ago.  Access to Facebook via mobile browser climbed 112 percent in the past year, while Twitter soared 347 percent.

"Social networking remains one of the most popular and fastest-growing behaviors on both the PC-based Internet and the mobile Web," said Mark Donovan, comScore senior vice president of mobile. 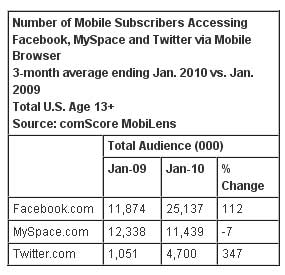 "Social media is a natural sweet spot for mobile since mobile devices are at the center of how people communicate with their circle of friends, whether by phone, text, email, or, increasingly, accessing social networking sites via a mobile browser."

Access to the most popular social networking sites via mobile browser continues to see significant growth.  In January, 25. 1 million mobile users accessed Facebook, up 112 percent from the previous year.  MySpace attracted 11.4 million users about half that of Facebook during the month.

Facebook’s mobile browser audience surpassed MySpace in February 2009, three months earlier than the Facebook audience climbed past that of MySpace on the PC-based Internet in May 2009.

Twitter, which has experienced solid growth in both mobile and PC-based visitation, attracted 4.7 million mobile users in January, up 347 percent over the previous year.