Online video viewing grew across all media categories in the second quarter with unique viewers increasing on average 2.8 percent per month, and consumers watched 11 percent more videos-month-over-month compared to the first quarter, according to a new report from Brightcove and TubeMogul.

Video consumption on newspaper sites grew the most over this period, surging to 65 percent more views than the previous quarter due to the coverage focused on the oil spill in the Gulf of Mexico.

Referral traffic for online video from Facebook and Twitter is growing faster than from traditional search engines. At current growth rates, Facebook will surpass Yahoo within the year to be the second only to Google for video referral traffic. 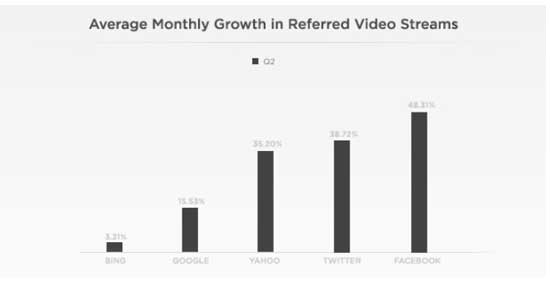 While Facebook and Twitter are attracting more viewers, they are also leading to the highest levels of engagement for video on television network and music entertainment websites.

*Nearly 60 percent of brand managers plan to invest more in online video in the next 12 months.

*More than 65 percent of brand managers indicate that the primary focus of their online video initiatives is awareness, followed by lead generation (21 percent) and e-commerce (12 percent).

*70 percent of respondents said they plan to add mobile video to their marketing mix in the next 12 months.

*Consumers who find marketing and e-commerce video via Facebook and Twitter have the longest viewing times (1:24 minutes and 1:18 minutes respectively), while traffic originating from Yahoo! search (0:52 minutes) and display ads (0:52 minutes) tied for shortest.