Facebook and Scribd have partnered to launch a new product called Readcast,   a new "sharing toolkit" which will turn Scribd from a site where users can read documents, to a place where over 10 million users can share what they are reading via Facebook and Scribd in bookclub-like fashion. WebProNews spoke with Scribd CEO Trip Adler about the product.

"Scribd is the place where connections form around shared reading interests," says Adler. "Now, the universe of social reading suddenly opens up to include Twilight fan fiction, investigative reports about Goldman Sachs, Mary Meeker’s Web 2.0 presentation, tips for using solar power. This reflects the breadth and depth of what people read on a daily basis, not just what they’re reading on news sites."

Scribd is taking advantage of the social plugins announced by Facebook today, allowing users to "like" their favorite reading material and see which Scribd books, research, presentations, illustrations, and other written workds their friends like, comment on, and share, without leaving Scribd. 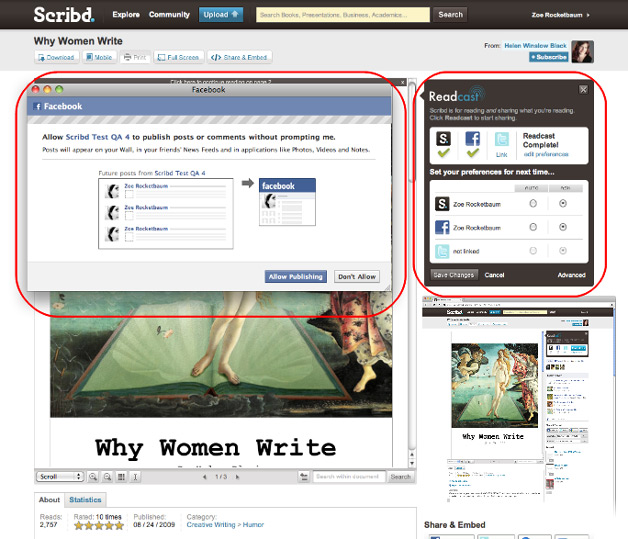 Adler tells WebProNews he believes more sharing will start happening passively as opposed to actively. People can simply set their account to automatically share the stuff they’re reading. And like Facebook CEO Mark Zuckerberg explained in his keynote, content will not simply show up in the news feed and fade away back on Facebook itself. It will be fixated in the user’s profiles, much like "liked" movies or music. Scribd is also using the activity feed plugin Facebook announced today.

"Now, its easier to connect with friends on Facebook who are reading the same books, researching the same topics or sharing the same recipes you would like,"  says Ethan Beard, director of Facebook Developer Network.

Adler says he views this integration as a "big moment for our company" and a chance to make Scribd "a household name." He says that in the way iTunes owns the music space, and YouTube owns the video space, Scribd hopes it can own the social documents/books space.