Watching Facebook CEO Mark Zuckerberg’s keynote at F8 today, Pandora was used as one of the prime examples of the social network’s freshly announced "Open Graph", or as I like to call it – Facebook’s overtaking of the web. When Facebook users use Pandora, they can "like" bands or songs, and that will be fully integrated to their Facebook experience as well.

Pandora is becoming one of the hottest ways of listening to music these days, so this is significant news not only for Pandora, but for music in general. It stands to reason that the more people and the web itself get consumed by Facebook, Pandora will be along for a good portion of that ride, at least for people who…listen to music. 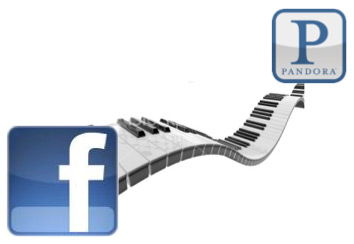 Pandora of course made an announcement of its own. "The idea behind today’s update is to make it really easy to share your Pandora stations and music discoveries with your friends – and vice versa," explains Founder Tim Westergren. "Now your friends can be a daily source of inspiration for new stations and music discovery. I’ve been testing out the service while we were developing it and I have to say it really brings a wonderful new human dimension to the listening experience."

Connecting Pandora and Facebook is optional. The company says it wants to be respectful to privacy and allows you to simply opt out. That’s probably a good thing for people afraid of being made fun of by their friends for having a Trivium station or something.

Those who do not opt out can get suggestions on new stations based on the music they’ve "liked" on Facebook. They can see which artists and songs you hear have been "liked" by your Facebook friends. Your Pandora profile page will feature Facebook info, and you can see music info about your Facebook friends who have Pandora accounts below your Pandora controls.